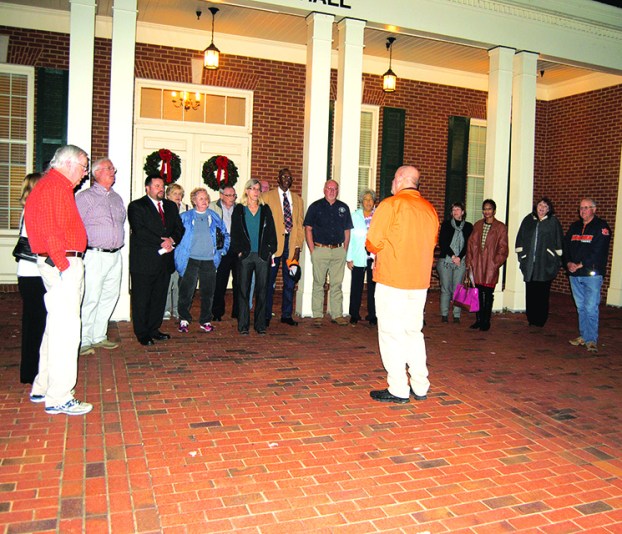 Police Chief Tommy Weldon (at center) led members of the Valley City Council and family members in some Christmas carols Monday evening at the city’s annual tree-lighting ceremony at city hall. The tree is some 24 feet in height and was donated by Gilbert’s Christmas Tree Farm in Fredonia. Membes of the council thanked retired polic officer Mike Cox on having done a great job in decorating the tree. This year’s tree has LED lights and is brighter than those in previous years. (Photo by Wayne Clark)

In a 7-1 vote on Monday, the Valley City Council approved a resolution granting Mayor Leonard Riley the authority to enter into any agreement on behalf of the city with potential businesses, or their agents, allowing them reasonable access to property being developed by the city in its new industrial park.

Industrial prospects, or their representatives, need to do due diligence  when looking at sites for future development. They may need access to property to thoroughly evaluate it and possibly do some soil testing before making a commitment to locate in a given area.

The resolution approved Monday allows them to negotiate such an arrangement with the mayor. There’s a signed contract between this party and the city which protects the city from any potential damage and/or liability through the due diligence process.

Potential prospects are much more comfortable negotiating with one representative of the city. It reassures them that their site search can be kept confidential. The city is benefited in that the recruiting process is promoted, simplified and expedited.

The council unanimously approved upon a first reading an amendment  to bring its business license in compliance with state law. It creates a new classification for businesses that deliver products or services in the city but do not have an address in Valley.

Such businesses are now required to have a delivery license, which costs $100 plus the issuance fee.

In order to have such a license, the following criteria must be met:

•Other than making deliveries, the business has no other physical presence in the city;

•Other than delivering merchandise and performing set-up and installation of that merchandise, they have no other business in the city;

•The business owns the merchandise and makes deliveries in vehicles they own  or lease;

•The gross receipts derived from the sales does not exceed $75,000;

Valley Parks and Recreation Director Laurie Blount informed the council that work has been completed on the tennis courts across from the Community Center and that they are now open. She added that the Ram Stadium track has been re-sealed and that the playing surface has been reseeded with rye grass. “It should be pretty and green this spring,” she said.

Mayor Riley said that the pace of work has been picking up at the Community Center, where a new senior center and an expanded fitness room is being built. The project was slowed down in the early stages due to problems with a subcontractor and the fact some needed materials came from the Houston area, which was heavily impacted by flooding from a tropical storm.

Construction is on track for the senior  center and fitness room to be open by late spring.

The mayor thanked Commissioner Sam Bradford (who was in the audience) and the county commission as a whole for going with the city in taking care of some needed improvements at the boat landings in Shawmut and Langdale. The city and county highway department have wrapped up work in Shawmut and have moved on to Langdale. Access roads and parking areas are being resurfaced at both sites.

The work is expected to cost around $220,000 with the county picking up around $140,000 of the tab and the city covering the rest. “We’ve taken the old pavilion down in Shawmut and will be building a good-sized one at that location,” Mayor Riley said.

The council unanimously approved a resolution permitting the serving of beer and wine at a wedding reception that will be taking place at the Community Center on December 16.

A local Christmas tradition dating back to 1956 resumes on Friday when the Christmas Merry Go Round opens to the... read more