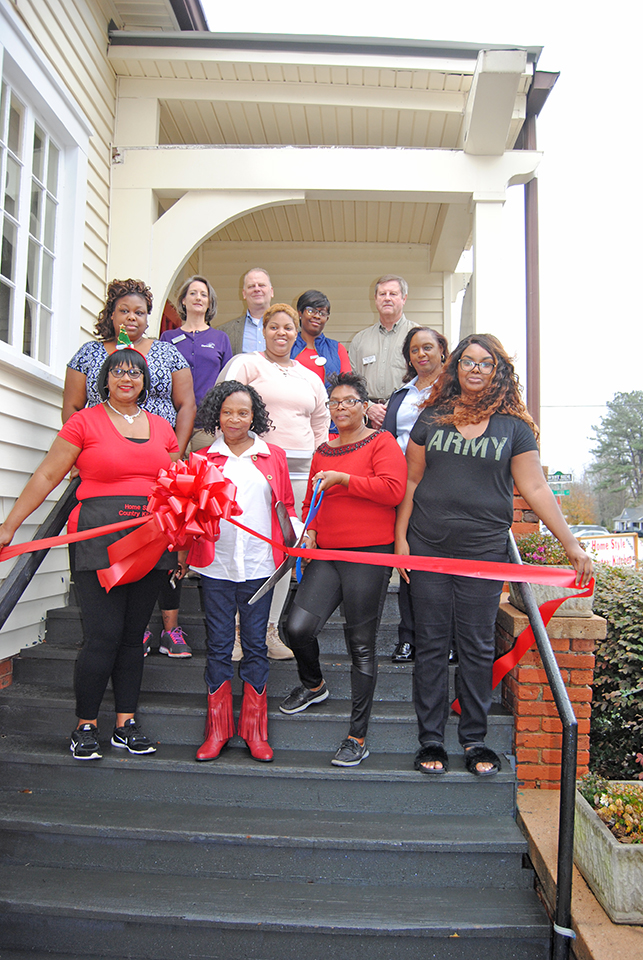 NEW BUSINESS IN WEST POINT – The Greater Valley Area Chamber of Commerce hosted a ribbon cutting at a new business Wednesday morning. Home Style Country Kitchen is located in the former Heart of the South building and will be serving cooking “like your mama used to make.” In front, from left, are LaTonia Patterson, Catherine Hutchinson, co-owner Stephanie Patterson (cutting the ribbon) and Meshieka Stewart. On the middle tow, l-r, are Nikki Wallace, Meteisha Stewart, and Alicia Lyles. On the top row, from left, are Lorraine Brown, Mayor Steve Tramell, Joe Hill and Adrian Holloway. (Photo by Wayne Clark)

WEST POINT — A ribbon cutting was held at 11:30 a.m. Wednesday at the Home Style Country Kitchen in downtown West Point. It’s located in the former Heart of the South building on North 2nd Avenue.

Having a home-style restaurant in West Point is something co-owner Stephanie Stewart Patterson of Opelika has wanted to do for some time now. On a visit to West Point a number of years ago, she looked for a local home-style restaurant to eat when she got hungry and couldn’t find one. She wound up eating a snack from a can she purchased at a Dollar General.

There’s got to be a better way, she thought.

“Everything we have is old fashioned home-style country cooking like your mama used to make,” she said. “The only food we have from cans is green beans and peaches.”

Patterson became an expert cook by preparing meals for a big family.

The Home Style Country Kitchen is truly a family affair. Mrs. Patterson has the assistance of her mother, Catherine Hutchinson; daughters Mesheika, Meteisha and LaTonia; and Nikki Wallace, a cousin.

“We are so glad to have a new business in West Point,” said Ashley Crane, executive director of the Greater Valley Area Chamber of Commerce. “We welcome you and wish you the best. When you  join the Chamber, you are part of the family.”

West Point Mayor Steve Tramell congratulated Mrs. Patterson on having a new business and thanked her for having it in West Point.