Honors rolling in for Panthers 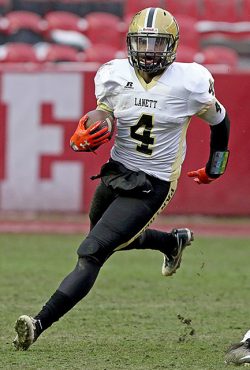 LANETT — Post-season honors are starting to pour in for the 2A state champion Lanett High Panthers. The Alabama Sports Writers Association’s (ASWA) 2017 All-State football teams have been announced, and Lanett has more players mentioned than any other school in the state. Eight Panthers have been named to the first team or the second team.

Class 6A champion Pinson Valley had five players on the first team. The state champions in the other classifications, 7A Hoover, 5A St. Paul’s, 4A UMS-Wright, 3A Hillcrest-Evergreen and 1A Sweet Water, each had three selections.

The next step in the path for Alabama’s Mr. Football comes this weekend when the ASWA reveals the finalists for the back and lineman of the year in each class. The winners, along with Mr. Football and the Super 12 team, will be announced at the annual Player of the Year Banquet presented by the Alabama High School Athletic Directors and Coaches Association, be held in Montgomery on January 17.

Running back Asa Martin Jr. of Austin High in Decatur was recently named the Alabama Player of the Year by Gatorade.

While the players received attention for winning titles, not one coach of the year in any class came from a team that won a championship. They included Laron White of Sparkman in 7A. Tim Perry of Wetumpka in 6A, Matt Glover of St. Clair County in 5A, Bart Lockhart of Dora in 4A, Taylor Leathers of Colbert Heights in 3A, Daniel Merchant of Sulligent in 2A and Eberne Myrthil of Marengo in 1A. The AISA coach of the year was Glynn Lott of Macon-East.