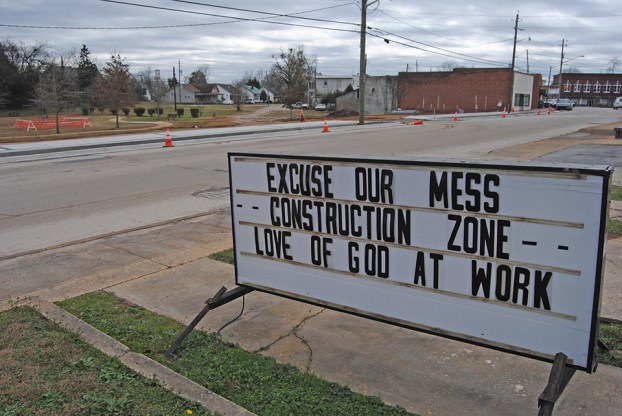 A ROUGH RIDE RIGHT NOW — North Lanier Avenue from downtown Lanett to city hall is a pretty rough stretch of road right now. It should be much better when the first two phases of downtown renovation are completed and the street is resurfaced. Some aging water line and gas lines have been replaced and some have been relocated away from the street. This makes it more likely the street won’t have to be dug up for some time once the new pavement has gone down. (Photo by Wayne Clark)

Overall improvements ahead for Lanett in 2018

EDITOR’S NOTE: This is the first in a four-part series looking ahead to the new year through the eyes of area mayors.

LANETT — With calendar year 2017 ending at midnight on Sunday to make way for 2018, Lanett Mayor Kyle McCoy is well pleased that the city has had an eventful year and is looking for even better things for Lanett in 2018. “We’ve had a good year, a really good year,” he said, “and I’m very optimistic about our future. I think things are looking up for the Greater Valley Area.”

In reviewing the current year, Mayor McCoy said that the year began on a high note with four bridges being newly reopened after a year of detours and bridge building. Four bridges were either washed away entirely or severely damaged by the Christmas Eve flood in 2015. The city was able to receive ample disaster relief funds to help with this, but it’s a lengthy process to complete. It took up most of 2016, but by the time January 2017 rolled around the city was in much better shape with its bridges. Even without the flood, the bridges on Cherry Drive, North 11th Avenue and North 12th Street would likely have needed to be replaced  anyway in the not-too-distant future. Having them washed away in a storm may have been a good thing for Lanett, given the major help they got in replacing them from the state and federal governments.

“We have some excellent bridges now,” the mayor said. “We are really happy about that.”

The mayor said that the Lanett High basketball and football teams made the city proud.

“We won a second straight state championship in basketball in 2017, and  it was great to see the football team go 15-0 and win the state title,” he said.

The mayor also said he was well pleased with the overall state of the school system.

“We’re doing well both athletically and in the classroom,” he said, noting a prestigious Bronze Award presented to the city school system by Newsweek.

Enrollment is up at W.O. Lance Elementary School.

“We had our first-ever film festival,” McCoy said. “It was very well received and well attended. It was a busy year with us starting a phase of our downtown renovation plan. We’re also doing some major work at the airport.”

The downtown area is getting a complete makeover with new sidewalks, decorative  lighting, planters and crosswalks. This new look with continue along North Lanier Avenue to the state line, where neighboring West Point already has a similar look. One difference will be that while West Point’s lamp posts are green, Lanett’s will be black.

The Lanett Municipal Airport is getting a new runway that will be approximately 4,400 feet in length. That’s around 1,100 feet longer than the existing runway, which can be used as a taxiway once the new landing area is opened in 2018.

The new runway will have much more visibility from I-85 than the present one does. When the new airport opens, south-bound travelers on I-85 will remember Lanett for three things: the Sweet Home Alabama welcoming sign, the visitor center and a neat-looking airport.

The city is making strides to improve the appearance along Highway 29.

“We’ve been working really hard with the property owners to do this,” McCoy said. “We’ve had some much-needed cleaning up work done there.”

A row of dilapidated houses on an entire block facing the four-lane was removed.

“We want to make places available for retail in Lanett,” the mayor explained.

Though there’s still a lot of work to do, some significant progress was made this year in the way of debris removal this year on the Lanett Mill/Bleachery and Dye Works site.

“People who visit Lanett every now and then tell us they can see a difference each time they come here,” Mayor McCoy said. “We are excited about seeing this site cleaned up for possible commercial development.”

Another improvement that’s being seen is the building of new homes in Lanett.

“We are seeing an increase in the issuing of building permits for this,” McCoy said.

The mayor said  he was very excited about the recent announcement of John Soules Foods coming to Valley and a follow-up announcement by the Chambers County Development Authority (CCDA) that new, high-paying jobs would be coming to the area thanks to the two cities working together in a joint endeavor with existing industries.

“There are some really good signs that the whole area is moving forward,” McCoy said. “I’m very proud of the work being done by the CCDA.”

The mayor commended the city’s Water and Gas departments on having relocated some water and gas lines and replaced aging lines with new ones.

“Some of these lines had been in the ground from 50 to 70 years and were in bad shape,” the mayor said. “We need to replace these lines before we pave over them,”

Something new coming to Lanett in 2018 will be illuminated street signs at key locations in the city, such as the intersections along Highway 29.

“We will have  them leading to Lanett High and Springwood School, and they will be in school colors,” Mayor McCoy said.

“Our thinking on this is that if there’s money out there, we need to figure our how we can get it to come here,” the mayor said. “It helps to have a good grant writer to do this for you. Louis is very conscientious about her work. It’s not just a job. She wants to help the community she works for. She’s earned her keep with us on what she’s done on the downtown project alone.”