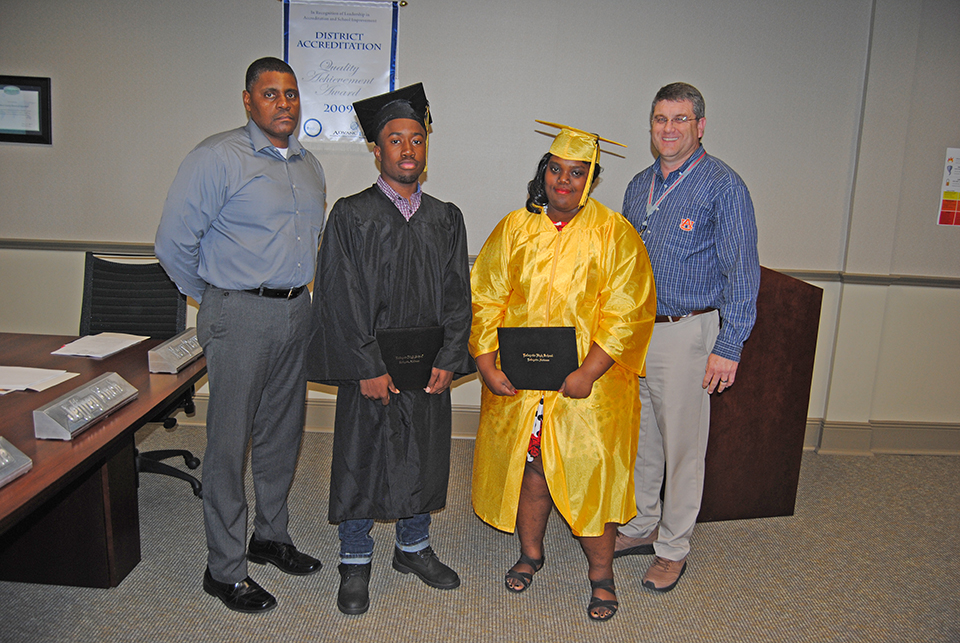 MID-TERM GRADUATES — Two LaFayette High students received their diplomas in a ceremony hosted by the Chambers County Board of Education Wednesday afternoon. Elantavious Foster and Bianca Howard (at center) have earned all the requirements needed to graduate from high school and to get a head start in attending college. They are shown above with their principal, Don Turner (at left), and Chambers County Career Technical Center Director Ken Sealy (right). The two students took courses through the CTC that are offered at LaFayette High. (Photo by Wayne Clark)

LaFAYETTE — Two LaFayette High students got early Christmas presents on Wednesday. It came in the form of a high school diploma.

Bianca Howard and Elantavious Foster each completed all their requirements to graduate and went through a graduation ceremony in the board room at the central office. It was the highlight event of the monthly meeting of the Chambers County Board of Education,

It was just like what takes place in May but on a much smaller scale. The two students were in their caps and gowns, marched into the room to the strains of Pomp and Circumstance and were presented diplomas by Superintendent Dr. Kelli Hodge. Parents and family members were there, and the graduates received a standing ovation.

It’s what’s called a mid-term graduation, and it’s becoming increasingly popular in the Chambers County School District. In many cases, it allows the high-achieving student the chance to start their college eduction early. They also have the option to join their classmates in May and walk across the stage at graduation before a much bigger audience.

“We are so proud of them,” Dr. Hodge said. “They have worked hard to achieve this milestone.”

LaFayette High Principal Don Turner was present at the board meeting to see two of his students graduate early. He congratulated both of them and had lots of praise for their work ethic.

Ken Sealy of the Chambers County Career Technical Center said that Bianca had been with the CTC programs offered at LaFayette High and he had been most impressed with her.

“We’ve seen her transform from a very shy young lady to someone who seizes the initiative to lead.” he said. “One day she came to school dressed really nice. When I asked her if anything special was going on she told me one of her teachers was going to be out that day and that it was up to her to manage the class.”

In business at Wednesday’s session, Dr. Hodge was pleased to inform the board that there would have to be no borrowing to meet payroll before Christmas this year. In most years, that’s done with a short-term loan that’s paid back with interest when the payroll is received from the state at the first of the month.

The board approved Dr. Hodge’s recommendation to approve some field trips that will either be out of state or overnight. They include:

•A Feb. 15-19 trip to Orlando, Fla. by W.F. Burns and Valley High students to a leadership conference;

•A Dec. 27 and 28 trip to Colquitt County High School, Moultrie, Ga. by the LaFayette High basketball team to take part in a tournament;

•A Feb. 1-3 trip by Valley High band students to Troy, Ala. for an appearance in the Troy University Honor Band;

•A May 10-12 trip by W.F. Burns and Valley High band students to Jacksonville, Ala. for an appearance with the Jacksonville State University Honor Band;

•An April 6-8 trip by VHS band students to Six Flags Over Georgia, the Georgia Aquarium, the World of Coca-Cola and the Fox Theatre;

•Several trips by the Valley High Step Team to competitions in Georgia.

Dr, Hodge announced that a former Valley Times-News employee would be coming to work for the Chambers County School District in a public relations role, starting in January.

Dr. Hodge told board members that a school system van was recently stolen, got into a high-speed chase with law enforcement and was wrecked. The totaled vehicle is now at the bus shop.

Dr. Hodge commented on a power failure that took place last Tuesday in LaFayette. She said she stood by a decision not to send the children home while the power was off.

“The power was off all over LaFayette,” she said. “If we sent students in the LaFayette area home, the power would be off where they lived. We kept them at school, fed them and sent them home in the afternoon when the power came back on at 1:30. We felt it was the best decision for us to make given the information we had. We did allow students to leave if their parents came to pick them up.”