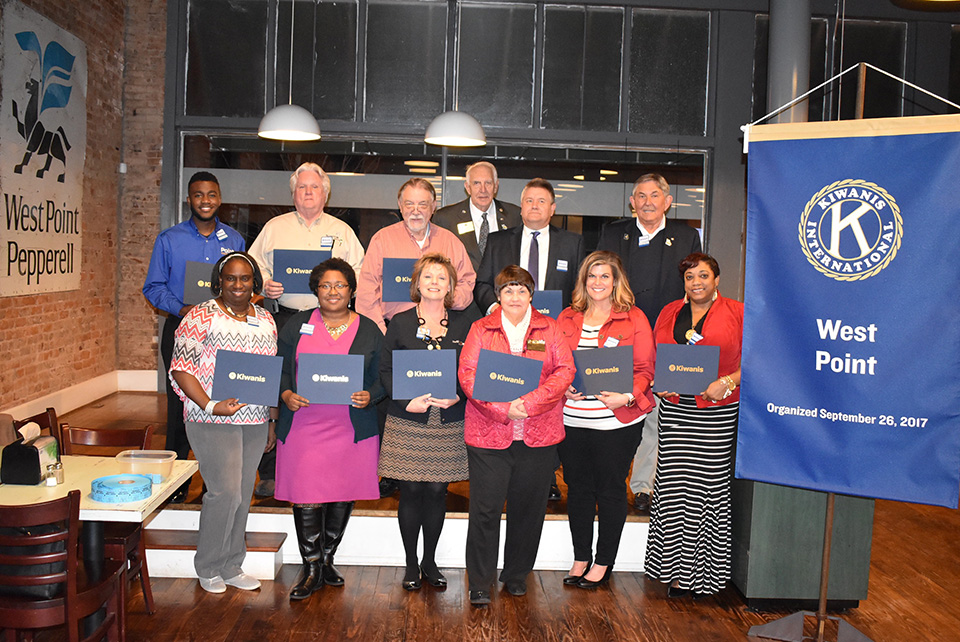 WEST POINT — The Kiwanis Club of West Point held a Charter Night Celebration Tuesday and much enjoyment was had as the group was officially recognized.

Many sponsors were on hand as club members dined at Pokey’s in West Point for the private party.

The night unofficially began nearly an hour early as members and guests started to gather before the sun had even set. There was much discussion as current members and past club officials caught up with each other.

The party officially got started with a welcome by club president Monica Barber.

“We are so happy to have you here representing different clubs and Kiwanis International,” she said. “We’re excited that you’re going to be partnered with us here in West Point.”

After her remarks, an invocation was given and the Pledge of Allegiance was recited followed by a rendition of the national anthem provided by club treasurer Demetri Tolbert.

Then club secretary George Elkins, who helped organize and prepare for much of the evening, gave the introduction and presented the guests for the evening.

“I appreciate all of you being here,” he said. “We look forward to an evening of just celebrating the new club with new club members.”

Following his remarks, the group paused to enjoy dinner provided by the people at Pokey’s.

The presentation of the charter was next, presented by Carol Wisdom, the 2016-2017 Kiwanis governor. Past Kiwanis Lt. Gov. Jim Sexton joined Wisdom in presenting pins and certificates to members.

Next, Sexton inducted the new club officers. Monica Barber is president; Paul Mosley is president elect; George Elkins is secretary; and Demetri Tolbert is treasurer. The board of directors includes, Julia Ambrose, Sexton and Reneta Buckner-Dowdell.

The event ended with a short speech by West Point Mayor Steve Tramell.

He declared January 2018 as the Kiwanis Club of West Point Month in the city.

“I applaud its members for their contributions to the entire community and the surrounding regions,” he said.