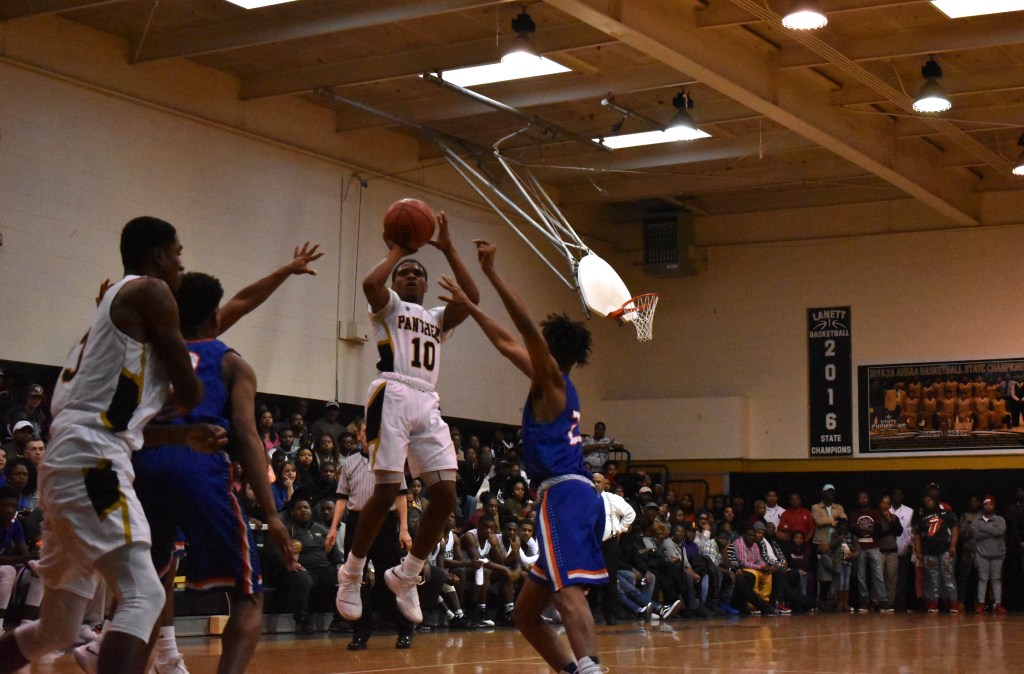 Lanett High School senior guard Ty Truitt (10) shoots a jumper in the first half of the Panthers' 74-54 home victory on Monday against Valley. (Photo by Sam Chandler)

LANETT — The Lanett High School boys basketball team worked tirelessly in the first half of Monday’s matinee matchup against Valley. But by the fourth quarter, the Panthers were simply having fun.

Trikweze Bridges soared for an emphatic one-handed dunk and Emanuel Littles slammed home an alley-oop to punctuate Lanett’s 74-54 runaway victory. Both acrobatic displays brought the home crowd to its feet.

Panthers fans had been sitting most of the game as they watched their team’s pressure defense grind down its opponent steadily.

Lanett (10-5) applied it from the outset, though Valley didn’t wilt initially. Tracy Winston Jr. and Quez Trammell made early scoring contributions as the Rams (10-8) trailed by only four after one quarter, 13-9.

Then, they began to break down.

“They put some pressure on us, and our guards didn’t respond,” Valley head coach Marshon Harper said. “But hey, I’m proud of my kids. We fought until the end.”

While the Rams cooled off, Anquaevious Pollard heated up. The Panthers’ senior forward poured in 11 of his game-high 25 points in the second quarter. A few of his buckets, like the short jumper he kissed off the glass two minutes before halftime, followed an offensive rebound.

“Tonight, I felt most comfortable down in the box,” Pollard said. “We had a height advantage above them, and they couldn’t stop it.”

Lanett needed Pollard’s post presence in the first half, as the team was without Littles until after the intermission. By then, the Panthers held a 32-20 advantage.

“He’s big for us every night, even when [Emanuel] is playing,” Carter said of Pollard. “He’s just now getting himself where he can play basketball because he played football so long.”

Pollard starred at wide receiver for Lanett’s state championship football team. In December, he played in the Alabama-Mississippi All-Star Game and was named to the All-State team.

His rust on the hardwood has begun to flake off.

After his strong showing in the second frame, Pollard added a pair of 3s as Lanett opened a 52-31 lead in the third quarter. Then, the fun began.

Bridges, who had 12 points, flew to the rim. Littles, who finished with 11, collected Kaleb Thomas’ alley-oop pass off the backboard. The home side voiced its support for the fifth-ranked team in Class 2A.

But Carter was quick to point out that the Panthers’ success started on the other side of the ball.

“We’re going to come at you with all we’ve got every day,” Carter said. “It may be man pressure; it may be zone pressure, but we’re going to make the game 94 feet.”

Kintavious Dozier led Valley with 13 points. Keionte Dent (11) and Trammell (10) also reached double figures. Lanett will return to home action on Friday against LaFayette. Clifford Story, the Panthers athletic director, confirmed that Tuesday’s 2A, Area 8 game against Horseshoe Bend has been rescheduled due to the threat of inclement weather.

Valley is scheduled to play Tuesday at Notasulga.