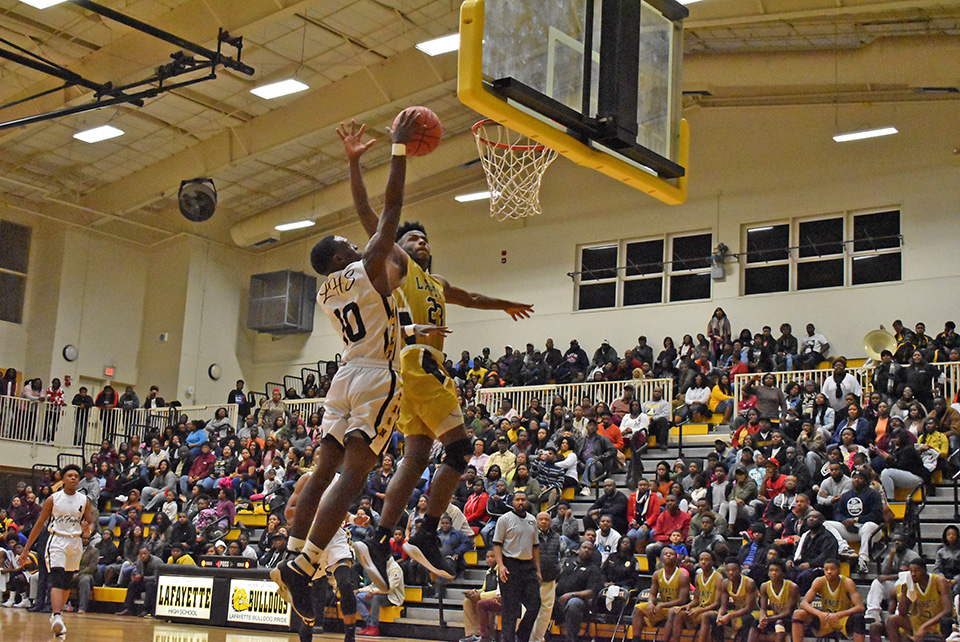 Littles stands 6-foot-7-inches, while Pollard measures 6-foot-8. The two poured in 28 of their 34 total points in the second half.

The Panthers needed them to perform at their peak.  In front of a spirited, standing-room-only crowd at the “Dog Palace,”  the host Bulldogs gave Lanett a fight.

But that was expected.

The Bulldogs played with the pain from that loss was seared in their memory, especially in the first half. They neutralized Littles and Pollard while knocking down critical shots.

Sophomore guard Jordan Wallace, who had a team-high 16 points, buried a midrange jumper and sank two free throws to give LaFayette a four-point lead, 20-16, in the second quarter.

The squads entered halftime tied 22-22. Littles used the intermission to gather his team.

“I said, ‘We’ve got to slow down and calm down. We’ve got to let the game come to us, and then we’ll be better,’” Littles said. “They listened, and we came out and did it.”

The Panthers hit their stride after the break. Littles and Pollard began to overwhelm an undersized Bulldogs’ lineup and established full control in the post. As a result, Lanett opened a 42-34 lead by the end of the third quarter.

“Defensively, we just have a hard time rebounding,” LaFayette head coach Obadiah Threadgill said. “They pose problems for us just because of the matchups.”

The Bulldogs, however, never wilted.

Twice they cut the Panthers’ advantage to three points in the final frame. Matavais Burton drilled a pair of 3-pointers, and Jamarquez Boston-Gaines added five points. But they couldn’t break through.

Lanett counter-punched with Littles, Pollard and guard Terrion Truitt, who finished with 15 points.

“Playing hard is enough sometimes,” Threadgill said. “But against Lanett, playing hard is not enough because they’re really talented and they’re going to give you everything they have.”

LaFayette’s Corey Boston and Boston-Gaines scored 13 and 10 points to join Wallace in double figures. The Bulldogs (11-5) dropped to 1-1 in the area. Lanett, which fell to Horseshoe Bend in December, improved to 1-1.