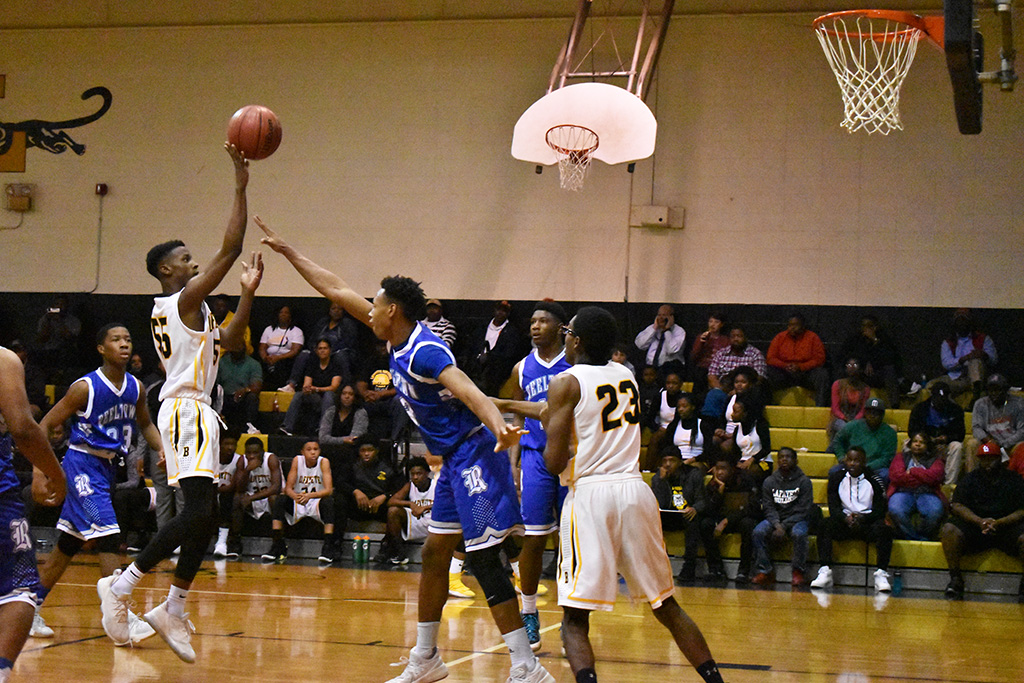 LaFayette High School sophomore Markevious Moore (55) contributed nine points in the Bulldogs’ win over Reeltown on Tuesday in the first round of the Class 2A, Area 8 tournament. (Photo by Sam Chandler)

LANETT — Obadiah Threadgill deployed a full-court press from the outset on Tuesday night.

His LaFayette High School boys basketball team forced turnover after turnover in the Reeltown backcourt. The result was a 74-47 victory in the first round of the Class 2A, Area 8 tournament.

“We’re just a little more explosive than Reeltown,” Threadgill said. “We’ve got some guys that can play, and we know we can play.”

The Bulldogs (17-8) wasted no time in asserting control. They built a 19-10 first-quarter lead behind a trio of triples from Corey Boston, JaMarquez Boston-Gaines and Markevious Moore.

LaFayette padded its advantage in the second quarter. Boosted by points off turnovers, the Bulldogs entered the halftime locker room with a 37-21 lead.

LaFayette maintained a sizeable edge for much of the second half, though Reeltown cut it to 12 twice in the fourth quarter. The Bulldogs responded to the Rebels’ second surge, which made it 56-44, by closing the contest on an 18-3 run.

“I still feel like I can watch the film and pull out 25 negative plays, and we were still able to beat them pretty convincingly,” Threadgill said. “That will definitely not be the case on Friday.”

That’s when LaFayette, ranked sixth in 2A, will face third-ranked Lanett in the area title game.

Threadgill said his team will need to prepare well to have a shot.

“We have to play the most cerebral game we’ve played to beat them,” Threadgill said.