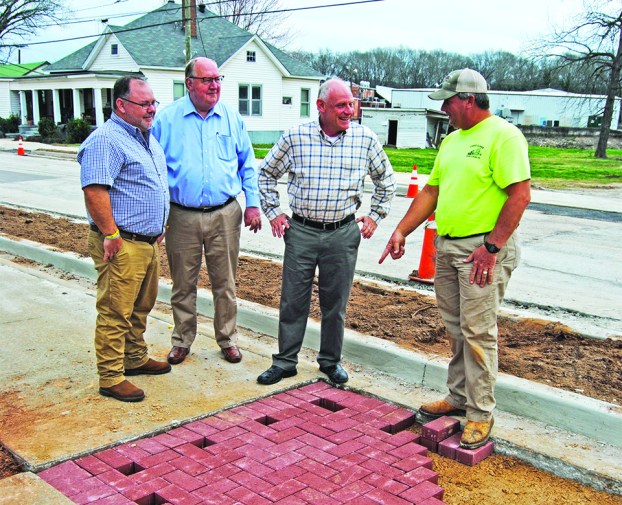 WAYNE CLARK | Times-News A HERRINGBONE DESIGN: Chris Clark (at right) shows (from left) Lanett Planning & Development Director Tony Chandler, streetscape consultant Tim Kant and Mayor Kyle McCoy one way bricks can be placed in front of city hall. The brick section will be part of the streetscape upgrade that’s taking place in the downtown area. Clark, who is the project contractor, experimented with the design with Lanett Fire & EMS Director Johnny Allen and Justin Wood.

LANETT — The portion of North Lanier Avenue in front of Lanett City Hall has been a busy work zone this week. Workmen have been building concrete curbing that’s part of a streetscape project that will dramatically transform the appearance of the street from the downtown triangle to  the bridge over Tanyard Creek. Additional phases of the project will be bringing new sidewalks, planters, brick-colored crosswalks, decorative lighting and a new triangle to the downtown area.

Project consultant Tim Kant was in Lanett on Tuesday to inspect the work that’s been done so far and was well pleased with the way it’s shaping up.

“When all is said and done it will be a real attractive addition to Lanett,” he said.

“You can’t go wrong when you put down new sidewalks.”

In Kant’s view, the current project is growing upon an investment city officials made some 30 years ago when a new city hall complex was constructed. It’s a natural outgrowth of that to have a really nice city street connecting downtown with the municipal complex and extending to the state line and to nearby West Point.

The city’s new look, Kant maintains, will beckon people of all ages to come out and experience small town life, It will be an ideal location for the elderly to take late afternoon strolls and for Point University students to go walking or jogging.

Kant knows much about making downtown areas more lively. He saw it first-hand in Fairhope, Ala.

“When we started in Fairhope in 1983, there was only around 25 tress in the downtown area, no flowers and very few cars parked anywhere,” he said. “Lots of businesses were boarded up. It’s very different now. There are lots of successful small businesses, and cars are everywhere now 24 hours a day, seven days a week.”

In 2016, Fairhope was named the best small town in the south by Southern Living magazine.

“We put energy into making it a place to shop,” Kant said. “We put out  flower boxes to give the area more appeal. Lots to little things contribute to a shopping experience, and it’s important to have local stores that are successful. It’s a good idea for cities to make investments in having small businesses. Those are the ones that support your community and its activities.”

Kant said that people don’t want to be around unsightly places, areas that are run down and lack activity. It’s very different, though, with places that are attractive, lively and just seem to pulsate with energy.

The challenge for a city like Lanett, he said, is to do something like a streetscape and to take care of it and build on it over time.

Downtown improvements will be coming with Phase II of the project. It promises to be a very nice area with new sidewalks, crosswalks that will be stamped to have a brick color, trees and seasonal flowers in planters and decorative lamp posts that illuminate the area with LED lighting.

Landscaping along North Lanier will begin very soon. The city will be working with Ponder’s Nursery in getting the right variety of trees and plants. Kant said that West Point has done a good job in transforming its downtown area.

It’s ideal, Kant said, to have trees that are relatively easy to maintain, won’t become inordinately tall but big enough to hide utility lines. The annual plants that will in the beds in front of city hall can be changed several times a year and have color schemes that reflect the time of year.

Having places that look nice, said Kant, have a way of drawing people. “People want to be safe and in areas that are inviting and attractive,” he said.

VALLEY — The site of the former Resurrect Antiques building has been cleared, so now there’s a new site available... read more