Streetscape project moving along for Lanett 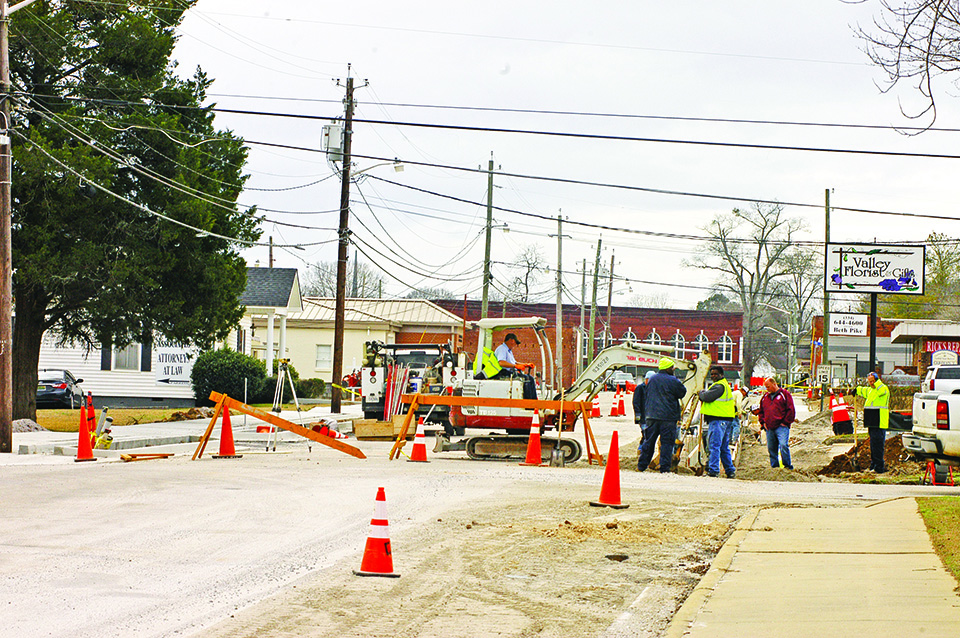 The current phase of the streetscape project in downtown Lanett has been completed on one side of North Lanier Avenue, and it’s now heading back toward downtown. On Thursday afternoon, workmen from the Street Department and from Chris Clark Paving & Grading were working on a portion of the sidewalk near city hall. Work in the downtown area should start in a couple of weeks. (Photo by Wayne Clark)

LANETT — Despite some setbacks with the weather, the downtown streetscape project in Lanett made much progress in the month of January, and the pace of work should really pick up in the coming weeks.

“It’s moving along,” Mayor Kyle McCoy said of the project. “A lot has been done recently. Hopefully we’ll soon be finished with this portion of the work and can get started in the downtown area.”

A contract for the next phase was awarded to Chris Clark Paving & Grading at the Jan. 22 council meeting. In addition to putting in new sidewalks, the next phase will see the rebuilding the downtown fountain and the installation of some brick-colored crosswalks.

“I think we’ll get started on the next phase in a couple of weeks,” McCoy said. “We will have a pre-construction meeting with state officials pretty soon. When they give us the OK we’ll get under way. It should be finished up in 120 days.”

The current phase  should take another four to six weeks to complete. The work to be done along the downtown triangle should get started within two or three weeks.

The city gas applied for a grant to resurface North Lanier Avenue from downtown to the state line.

“What’s been done thus far will really look good once we get some of the landscaping in,” McCoy said. “Ponder’s Nursery in Valley will be doing that for us. We are really pleased to have some local people contracting with us. Chris Clark has done good work and we are confident that Ponder’s will do good work for us as well.”

“We have come a long way on this project since the first of the year,” McCoy added. “I think people will be really pleased with the way it looks this summer when the new plants are growing. I want it to be looking good when we have our second annual film festival in September.”

The film festival will be taking place on the first weekend of September.

The inaugural film festival took place this past August and was well received by the local community. Up and coming filmmakers from throughout the U.S. – and some from western Europe – submitted films they’d made. Audiences had the chance to see them in five different venues in Lanett and West Point.