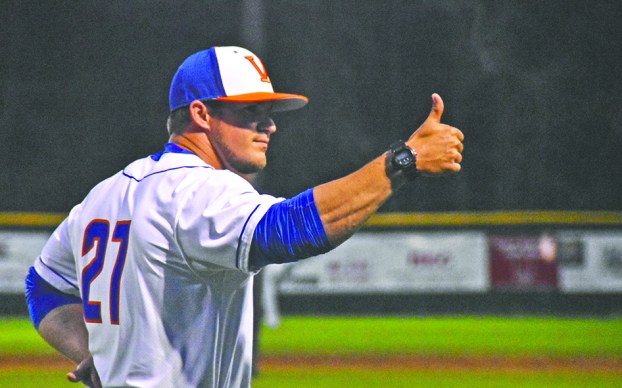 Valley High School baseball coach Patrick Shivers motions toward his dugout during the Rams’ game against Tallassee on Wednesday, Feb. 28, at Crestview Stadium. Shivers enters the 2018 season optimistic about his team’s chances of building on its success from a season ago, when it won an area championship and advanced to the second round of the Class 5A state playoffs. (Photo by Sam Chandler)

Last year, the Rams elected “never settle.” And settle they did not.

Under head coach Patrick Shivers, Valley won an area championship for the first time in 24 years and advanced to the second round of the Class 5A state playoffs.

In the first round, the Rams grinded out two wins in a hard-fought three-game series against Jackson.

2017 went down as one of Valley’s most successful campaigns in recent history.

This spring, the Rams are looking to build on it. Their new motto: create the culture.

Valley’s toughest competition in 5A, Area 5 will be Beauregard, which made it to the third round of last year’s state playoffs.

Booker T. Washington also competes in the area but poses less of a threat.

The Rams will vie for a second straight area crown without its top pitchers from 2017. Ryan Meadows and Bubba Burrows both graduated.

“This year we’re just trying to establish some pitching,” Shivers said. “We have two good pitchers right now that have established themselves as one and two.”

Seniors Tyler Lott and Josh Bledsoe are the strike-throwers in reference.

Lott returns from last spring’s squad, while Bledsoe is a new addition to the roster.

He transferred in from South Carolina and played quarterback for Valley’s football team in the fall.

Sophomore Eli Culpepper, freshman Will Kennedy and McDonald are likely candidates to round out the Rams’ rotation. All have pitched well so far, as Valley is off to a 7-3 start.

The Rams have allowed three runs or fewer in five of their seven victories.

“We’ve been able to establish the strike zone, we’ve been putting the ball in play, we’ve been playing solid defense behind our pitching,” Shivers said. “Everything’s going well as of right now.”

While reliable pitching will be a key for Valley throughout the spring, so too will its ability to push runs across the plate.

When Shivers took over the program a year ago, the Rams had posted a team batting average in the .250 range the previous season.

That number jumped .305 under his direction. He doesn’t forecast a decline this spring.

Bledsoe, McDonald, Daniel Osborne, Sam Henderson, John John Davis, Andrue Davis and Chris Conner are among a number of Rams who can produce at the plate.

Shivers said that Osborne, only a sophomore, possesses the most raw power of anyone on his roster.

“Our bats, to me, have come a long way in recent years,” Shivers said.

Shivers will be assisted this season by Heath Smith, a former teammate of his at Beulah.

The two will attempt to guide Valley to another area title and secure home-field advantage for the first round of the playoffs.

In the postseason, they are hopeful the Rams will be able to make a run.

“It takes more than one good season to have any type of successful culture,” Shivers said. “We’re hoping to win the area championship this year and create the culture that Valley baseball is back, that we’re a good team and we’re not going anywhere.”

The Rams defeated Handley on Monday, 3-0, to pick up their fourth consecutive win.

McDonald pitched a masterpiece. He recorded five strikeouts and surrendered only three hits en route to a complete-game shutout.

The Rams will return to action on Wednesday at Tallassee. They will then return home to face Beulah on Friday.