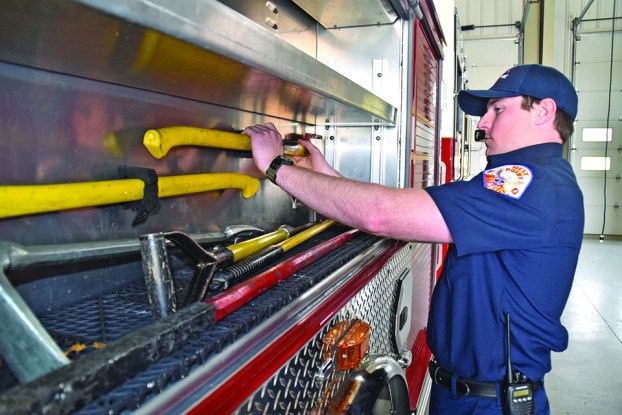 Steven Thomas | Times-News Checking the Equipment: West Point firefighter Grayson Hope looks over some of the equipment on the truck.

Despite family history, helping environment got him to serve

WEST POINT — Grayson Hope has a lot of history with firefighting. His father was a captain in the Opelika Fire Department and Hope spent a lot of time at the station. His brother, Cody, is also a firefighter with the city of LaFayette.

Despite all this, Hope never really thought of himself as a firefighter.

“It didn’t appeal to me,” he said. “I always thought I’d be doing something different.”

However, after high school Hope volunteered with the Huguley Fire Department and then things changed.

“I loved the atmosphere of the people, being around the crew and knowing you’re able to help,” Grayson said. “The apple doesn’t fall far from the tree. I visited Dad at work and he was a hero to us.”

After a stint in Huguley, followed by four years at Auburn, Hope ended up in West Point a little over a year ago. He also works part-time for the LaFayette Fire Department.

“It’s a chance to grow,” he said of the recent move.

While at work, Hope and other members of his crew do several things, from checking the vehicle and equipment to eating and getting briefed on what the previous shift did.

When the work is done, Hope and others relax .

“We workout to relax and relieve stress,” he said. “A lot of cardio and lifting weights.”

Hope added that sometimes they use field equipment and wear their gear as part of the workout.

“It helps us prepare a little but it’s nothing compared to a real fire,” Hope said.

He added that he worked with a lot of good people, one of which he graduated high school with alongside another that works at the LaFayette department.

“Several of these guys deserve recognition,” he said.

When not on the clock, Hope spends his time with his girlfriend and hunting.

Know a first responder in need of recognition?
Let us know! Email
news@valleytimes-news.com.

Smith has spent life helping others

LANETT — Barry Smith has spent his adult life helping people, and that’s the best kind of neighbor anyone could... read more