LANETT — Springwood School senior Grant Easterwood pitched a gem on Tuesday. But the Wildcats couldn’t back him up at the plate in a 7-0 loss to Lakeside.

Easterwood had a perfect game entering the fifth inning. He pitched through the sixth,  surrendering only one run on two hits while recording five strikeouts.

“His breaking ball was working good, and he was also hitting his spots,” Springwood head coach Colby Terry said.

Springwood played Lakeside earlier in the season. The previous encounter equipped Easterwood, the Wildcats’ ace, with a sense of familiarity.

“He knew what to expect and who could hit what,” Terry said. “He just knew where to put the baseball.”

Things got dicey after Easterwood exited. Walks, passed balls and a pair of errors allowed Lakeside, which notched only four total hits, to plate a few runs.

“We never fell apart,” Terry said. “They just kind of scored a couple runs here and there, and it ended up adding up to seven.”

Springwood didn’t have an answer.

Like  Lakeside, the Wildcats mustered only four hits. But they left seven runners in scoring position over the course of the contest. Springwood also had a couple of runners picked off base.

“We just couldn’t produce when we needed to,” Terry said.

The Wildcats (3-5) won’t play again until Monday, when they host Eastwood at 4 p.m. EST. Terry said he thinks the break will help his team iron out a few kinks.

“I definitely think it will,” he said. “Small things will be the key to winning.” 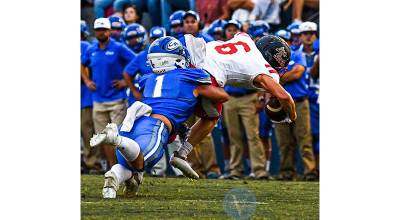