Boozer soars to the top 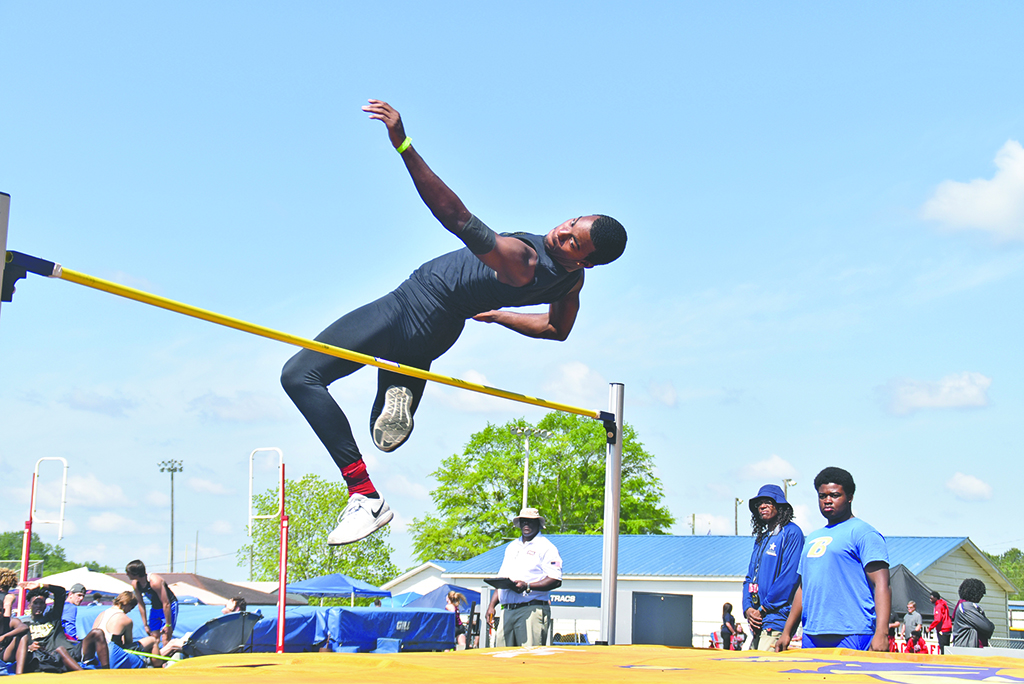 Lanett High School sophomore Zameron Boozer has transformed into one of the top high jumpers in Class 2A. (Photo by Sam Chandler)

Boozer, a 6-foot-6 sophomore, cleared heights of 5-4 and 5-6 at a March meet hosted by Beauregard High School.

Then, he hit a wall.

The track and field rookie couldn’t sail over the bar when it ascended to 5-8.

“I told him, ‘It’s almost impossible for you not to be able to jump 5-8, because you’re so tall,’” said Price, Lanett High School’s head coach.

But gravity has slowly loosened its grip on Boozer, who in two months has emerged as one of Price’s most promising pupils.

His personal best has increased by 8 inches, to 6-2.

The mark has earned him a top seed in Saturday’s Class 2A state competition at Cullman High School, where Boozer will vie for his first state title.

“I listened to the coaches,” said Boozer, whose brawny basketball frame belies his high-flying ability. “They told me what to do, so I just did it.”

Practice has keyed Boozer’s meteoric rise from vexed novice to aerial ace. But it hasn’t been easy.

Lanett High does not have a high jump pit, and its absence has limited the frequency with which Boozer has been able to hone his newfound craft.

Performing practice jumps has mandated trips to Valley High’s Ram Stadium, which has its own equipment.

There, he has worked with former Lanett standout turned pro track and field athlete James Harris.

The trips have often occurred on Boozer’s own time.

“When he makes up in his mind that he wants to achieve something, he really works to get it done,” Price said.

Price knew of Boozer’s athletic ability long before he stepped foot on the track.

Boozer and his twin brother, Cameron Jr., have been linchpins the past few seasons on Lanett’s junior varsity basketball team, which Price coaches.

The siblings are the sons of former Auburn and Troy basketball player Cameron Boozer, Sr.

Both Boozer brothers concentrated on basketball before trying out track this spring. Zameron Boozer has soared since.

He improved his personal-best mark by 6 inches in his third meet, when he cleared 6 feet. Two weeks later, he hit 6-2.

That’s the target height Price encouraged Boozer to aim for at the end of the season. The achievement only prompted Boozer to raise his expectations.

“I think I can do a little bit better,” he said. “I’m not settling for less.”

Boozer will face a talented field in Cullman, but that doesn’t daunt him.

He has beaten a few of his top challengers in head-to-head competition, including at last week’s Section 3 meet. Boozer won the section title with an effortless clearance of 6 feet.

A gold-medal performance wouldn’t surprise Price, as Boozer has blossomed before his eyes.

“It’s going to be competitive, but hey, he’s right there in the mix,” Price said. “I think a state title is well within his reach.”