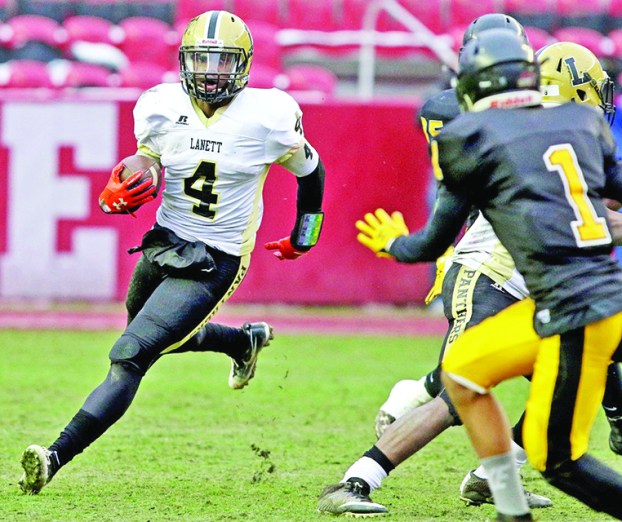 File Photo | Times-News Kristian Story: Kristian Story is a rising-junior quarterback with the Lanett Panthers. He is shown above running during a game last season..

OPELIKA — During Friday night’s quad-spring scrimmage at Beauregard High School, the Lanett Panthers picked back up right where the team left off last season.

“In spring evaluation we had a chance to get about eight practices in and I was pleased with my guys,” Lanett head coach Clifford Story said. “We played two good teams in Reeltown and Beauregard. I’m sure they’ll be in the playoffs. So, I feel pretty good.”

No returns were allowed on special teams in the scrimmage and the four teams alternated possessions on offense and defense. Lanett and Carroll played the role of the away team wearing white uniforms while Reeltown and Beauregard collaborated as the home team wearing blue uniforms.

Led by rising-junior quarterback Kristian Story, the Panthers’ offense appeared to be running like the same well-balanced machine that ended up in a 15-0 state championship 2017 year.

Kristian heard the cheers from his classmates in the stands as he accelerated and the defenders surrounding him trotted seemingly slower and slower.

After another first down run from another Panthers running back, Kristian called his own shot again on a QB draw. Smaller defenders attempted to bring him to the ground but didn’t stand a chance when the 6-foot-2, 196-pound athlete ducked his head down with them. “

Ke-Ke” scored again, this time as a rushing touchdown. He had a pair of scores through the air from earlier in the night.

“He’s just an athlete making plays” Clifford said of Kristian. “He fumbled right there but I was pleased with him. Like I said, we’ve only been playing football for about eight days and we came down here and played two tough teams but we’ll keep working. This summer, we’ll go to Louisiana to the Manning Passing Academy, work on his quarterback skills and we’ll do some DB work.”

Carroll opened the second half with two turnovers, which went much to the delight of the Lanett “teammates” when the Panthers offense encountered the Eagles defense coming onto the field.

The away team won the match up, 26-20. The Panthers offense accounted for three of those scores. Next in line for the defending 2A state champ’s schedule are summer workouts.