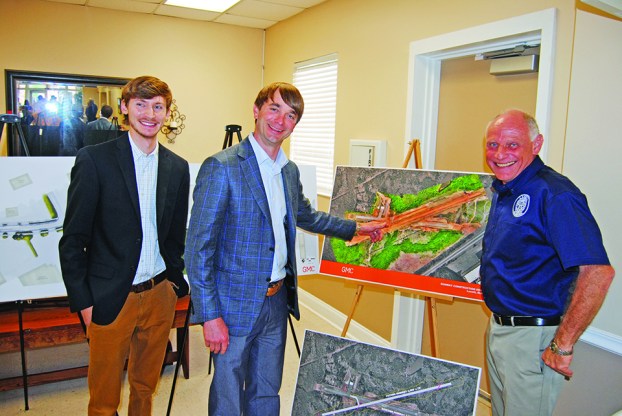 LANETT — During the noon hour on Wednesday the Greater Valley Area Chamber of Commerce hosted a second Lunch N Learn program highlighting a local city. Valley was spotlighted in the first program of the series, and West Point will conclude the series in a few weeks.

It was Lanett’s turn on Wednesday, and Mayor Kyle McCoy talked about the current streetscape project in the downtown area, the progress being made in a major undertaking at the Lanett airport, plans for a major upgrade with the city’s electrical system and other topics.

Plans are for the streetscape to be done in four phases. The first one is complete and the second is well under way with phases three and four in the planning stages.

Each phase is being funded by federal grant money with the city putting up a 20 percent match. Mayor McCoy said it’s a tremendous bargain for the city to have such projects with the federal government picking up the lion’s share of the cost. The first section that’s complete runs from city hall to the Jane Farrar Event Center, where Wednesday’s luncheon program took place. It cost approximately $225,000, with 80 percent being in the form of a Community Development Block Grant.

“We have new sidewalks, lighting, planting areas and street paving,” the mayor said.

The work that’s now under way is in the downtown triangle area. The work is being funded by a $294,000 grant.

McCoy commended Johnny Allen and Tony Chandler on having devoted many hours to the streetscape project.

Much like what’s been finished, the downtown area will have new sidewalks, crosswalks, new lighting and planting areas. There will be a new triangle with the original fountain, new signage and benches.

Phases three and four of the streetscape project will be from the bridge over Tanyard Creek on North Lanier Avenue to the state line. Phase three will be for one side of the street and phase four being the other side.

“It’s been a relatively small investment on our part to transform the downtown area,” McCoy said.

The mayor said he liked the new lighted signs that are up at the city’s major intersections. He said that plans are to have more such signs on Highways 29 and 50. “They look good and do a good job of directing people who are from out of town,” McCoy said.

The mayor said that some electrical department upgrades are under way in preparation for some new residents coming to the city.

The new residents are Point University students who will be within easy walking distance to their classes in the new housing that’s now going up.

“We are excited about them coming to the area,” McCoy said.

This is a big year for paving in Lanett. Approximately two-and-a-half miles has been done thus far and could go up to four miles altogether this calendar year.

McCoy said he was pleased with what had been going on with the airport project. A tremendous amount of work has taken place there in the last year.

“We will be in a different kind of category for planes that can land there,” he said.

The mayor said that the Valley area has a lot going for it right now.

In its heyday, McCoy said, WestPoint Pepperell was good in bringing new people to the community, people who get involved in all sorts of activities and make the community a better place.

“We need to be open in welcoming new people to our community,” McCoy said. “We are trying to make our downtown area a welcoming place.”

LaFAYETTE — Captain George Rampey of the LaFayette Police Department has been named the City of LaFayette’s new chief of... read more