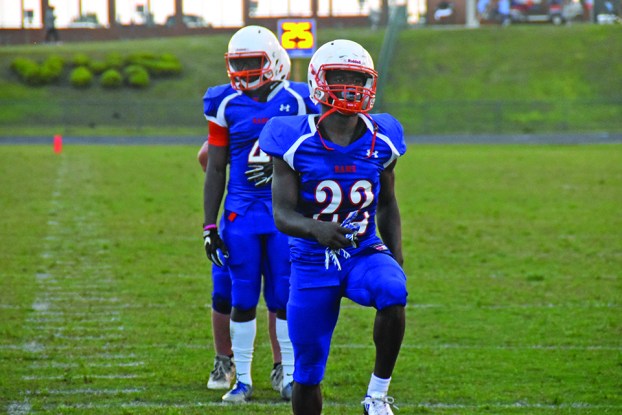 Valley rising freshman running back B.J. Baker (No. 22) stole the show during Friday night’s spring exhibition against Beulah. Baker broke free from the Bobcats defense for two scores in the match up.

VALLEY — It was smooth sailing for the Valley High School football team in its spring exhibition game on Friday night.

The Rams defeated the Beulah Bobcats, 28-6.

“I was just excited to see our guys get out and perform,” Valley football head coach Buster Daniel said. “We’ve been hitting each other for three weeks now and it was good to compete against somebody else. Beulah gave us good competition, they’re a good little team and my guys played really well. I was very pleased.”

Valley rising freshman running back B.J. Baker broke free twice in the second quarterback for two touchdown runs. The first came when Baker saw an opening in the Bobcat defense for a huge 50-plus yard run with 9:31 remaining in the first half. The second scoring run came nearly five minutes later as Baker rushed to the edge for a hurdling touchdown in 4:17 to go in the second quarter.

“He’s a special individual,” Daniel said of Baker. “He really is.”

Baker’s two runs were the lone scores of the night until Beulah rising senior quarterback Lonzie Portis scrambled for his own touchdown with 4:50 to go in the third quarter. Portis shared snaps with rising sophomore Caleb Abney in the first half. The rotation was only to see how the first and second units looked so far and it wasn’t an audition for a quarterback competition, Beulah head coach Cody Flournoy said.

“Lonzie Portis is our starting quarterback,” Flournoy said. “Caleb’s the future of the program. We believe in him. He’s got to get a better grip of the offense but as he showed tonight he made some great throws and executed the offense so we were happy to see that.”

Rams rising junior quarterback Eli Culpepper had a touchdown that was called back with 7:36 left in the fourth quarter, only to scramble his way back into the end zone a couple of plays later to put Valley on top, 21-6.

Culpepper finished the night with a touchdown pass to rising sophomore athlete Will Kennedy with 3:12 to go in the game for the final score of the night.

The scrimmage marked the end of spring practices for both schools as summer workouts are now next for the squads.

Even in the loss, Beulah took away positives from the match up on a night where the Bobcats missed a couple of scoring opportunities in the red zone.

“We got a lot of good film on these guys that we’ll be able to use and just move forward,” Flournoy said. “I told the guys at the end of the game that all we have to do is get better. Valley’s a bigger school than us. They play two classifications up so they’re going to have one or two more guys than us and we knew that coming in but we still felt good about coming in tonight and I thought we played well.”