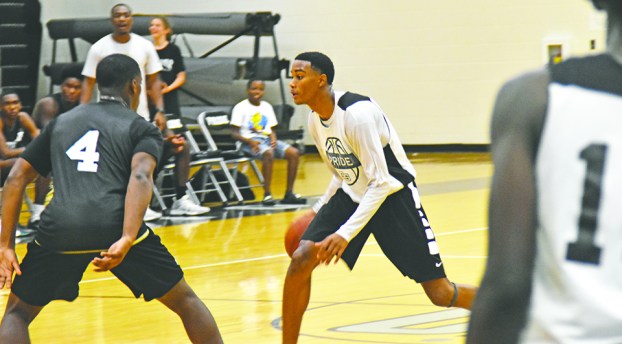 TO THE CUP: Smiths Station guard Eric Butler handles the ball at the top of the key with Lanett guard Kristian Story defending him.

SMITHS STATION — If the respective Panthers of both Lanett High School and Smiths Station High School wore in-season jerseys this past Thursday, spectators probably wouldn’t have realized that they were witnessing a scrimmage in the middle of June.

Class 7A SSHS and Class 1A Lanett were in a heated battle trading blow-for-blow during a summer circuit of games on Thursday afternoon. SSHS 6-foot-3 guard Eric Butler came out swinging against the three-time defending state champion Lanett Panthers by draining a couple of buckets within the first few minutes after tipoff. Lanett forward Jayshon Burton gave a consistent presence for Lanett down low on the post to keep the Panthers within striking distance.

Competitiveness then kicked in for both squads as the fouls and trash talk increased towards the end of the first half. The spectators contributed to the increased tension as well. The 6-foot-5 Burton began chirping back at a smaller Smiths Station defender to the point a referee had to intervene on a couple of occasions. Then there were a couple of calls that Lanett forward Trikweze Bridges didn’t necessarily agree with when the game started to become more physical.

Every dunk or crossover from Smiths Station received “Oohs!” and “Ahhs!” from the home crowd, with chants of “Defense!” breaking out from the Smiths Station bench. Guard Kristian Story tried to keep Lanett’s composure by slowing down the ball when the Panthers didn’t have numbers and knocking down the occasional three when given the space.

Despite the runs that Lanett made, Butler and Smiths Station responded with a run of their own, knocking down shots when it appeared that their backs were against the wall. The final blow came with 2:15 remaining when a Smiths Station layup that pushed the lead near double digits resulted in a Lanett timeout.

The slugfest ended in a loss for Lanett with a quick turnaround for the Varsity squad as they played back-to-back games to wrap up the day.

Next season, Lanett will have to replace two-time 2A State Player of the Year Anquaevious Pollard and 2018 State Tournament MVP Emmanuel Littles. Replacing the duo shouldn’t be a problem in regards to losing the size of the 6-foot-7 and 6-foot-8 forwards, with the Boozer brothers coming back as juniors and the 6-foot-6 Tifton “Dee” Dobbs stepping in to the starting lineup as well but the adjusted roles may take some time.