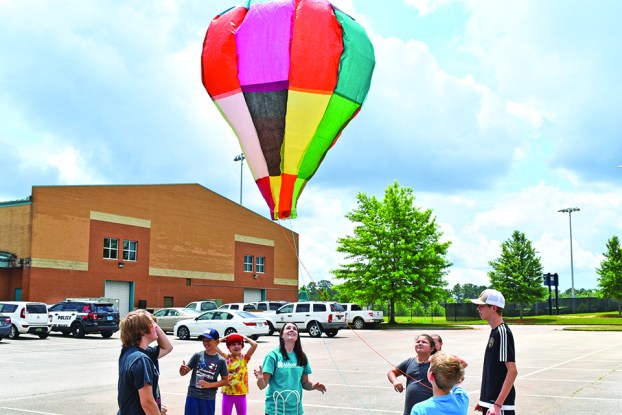 Flying high: 4-H STEM campers look up at their hand-made hot air balloon as it hovers above them. Chris Heaney | Times-News

VALLEY — Young faces looked to the sky with unfiltered awe as they watched the over 6-foot-tall balloon they had made out of paper and glue just moments before hover above their heads.

It was the third and, to the disappointment of many of the kids in attendance, last day of the inaugural 4-H STEM camp that took place this week at the Valley Community Center.

STEM stands for science, technology, engineering and mathematics, and those at the camp were able to learn about these concepts in hands-on, fun-filled ways.

Tuesday tasked the kids with getting a LEGO robot through a maze, testing the computer programming skills of those who had them and teaching those who didn’t more about how it all worked.

“Never, I had never used those before,” said Katie Carpenter, one of the STEM camp’s attendees.

“I like robots and I really like LEGO, so mashing up both of those things just made it even better.”

Wednesday had a focus on rockets. The kids launched crafts of their own design using water pressure and solid fuel motors in attempts to hit a target or just see how high they would go.

On their final day, camp attendees cut out bits of tissue paper to make panels called “gores” that they connected with glue to form a large hot air balloon.

With some help from 4-H Regional Extension agent Rachel Snoddy and assistant Katie Hill, they inflated the balloon with propane and sent it aloft.

According to Snoddy, the camp was a success.

“I think it was a blast, no pun intended,” she said.

“We had a great time. The kids were really engaged and each day they were telling me how much fun they had.

The parents would even come to me the next day and say, Oh my god they were telling me all about it and it sounds like y’all were having a great time.’ I think it was a big success.”

Snoddy explained that the camp hit its mark by teaching kids in ways that kept them interested and allowed them to stay involved throughout.

“That’s what’s important, I want the kids to have fun while they are learning and not even realizing they’re learning something,” she said.

“They are keeping engaged and doing these hands-on activities so they can really get into it and work together. I love to see the kids have fun and their faces light up when their project works.”

It was clear that the general consensus among the kids involved was a positive one, and many of them could be heard talking to one another about their hopes for next summer’s camp, which will be free to the public as this one was.

“It was really good,” said Benjamin Pamperin. “I’m wondering how it was free.”