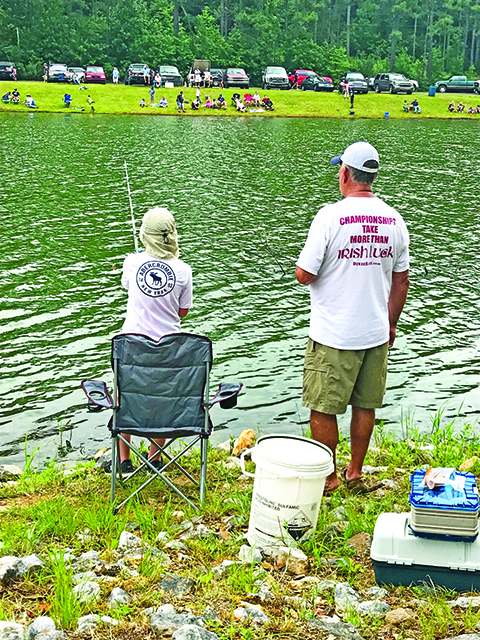 CHAMBERS COUNTY — After an approximate eight year absence, the Kids Fishing Rodeo returned to the Chambers County Lake this past Saturday.

“From what I understand, one of the gentlemen who lives close to me came over and told me that he’d never seen this many kids at a previous event,” Lake Manager Ted Craig said.

Over 300 residents were in attendance at the event to watch 168 registered children 12 years old and younger participate in the competition where free red worms for bait and free water to keep them hydrated were offered. The event began at 7 a.m. CDT and concluded at 11:30 a.m.

Jeremiah Roberson caught the largest fish of the day, reeling in a catfish that weighed 11 pounds, 10 ounces, according to Craig. The first-place most-weight winner was Jaycee Hadaway, who caught eight fish for 16 pounds, 10 ounces, second place was Mon’Quavian Morgan with 13 pounds, 1 ounce, and third-place Skye Vallia with 7 pounds, 15 ounces. All winners throughout the day received prizes.

A total of 58 catfish that weighed 121 pounds were caught throughout the day.

“Several people caught plenty of fish,” Craig said. “Everyone was really happy, the parents, the grandparents, the guardians, the kids, everyone.”

A hot dog sack lunch cooked by Chambers County Sheriff Sid Lockhart was provided to all of the registered fishers. Raffle and door prizes were also given away to those in attendance.

“The event was a great success,” Executive Director for the Greater Valley Area Chamber of Commerce Ashley Crane said in a press release. “Thank you to all the volunteers including the Chamber of Commerce Ambassadors for giving their time to help make this event possible.”

This year marks the first time in nearly a dozen years the fishing rodeo was held, Craig said. The planning for this year’s event began in March.

“The lake managers worked very hard to bring this event back to the community and we look forward to partnering next year to have the Kids Fishing Rodeo again,” Crane said, according to the press release.

To improve the event’s experience, next year Craig said he is looking to add a fun and food element to the rodeo. So while participants are fishing at the Chambers County Lake, games will be going on at the nearby park and food will be available near the pavilion. The event’s name would be changed to Chambers County Lake Community Family Fun Day & Fishing Rodeo.

Craig manages the lake with his brother, Mike. The lake managers have offered $1,500 over March, April and May for fishing tournaments that challenged participants with catching crappie, bass and catfish, respectively. Last month, Rodney Beaty took home $500 for winning all three awards including largest fish, most number of fish, and highest total weight of fish.

This upcoming fall, the lake plans on hosting one-day fishing tournaments for residents of all ages once a month from August through November, Craig said. The staff at the lake is also encouraging residents to come fish and picnic at the lake on the Fourth of July.