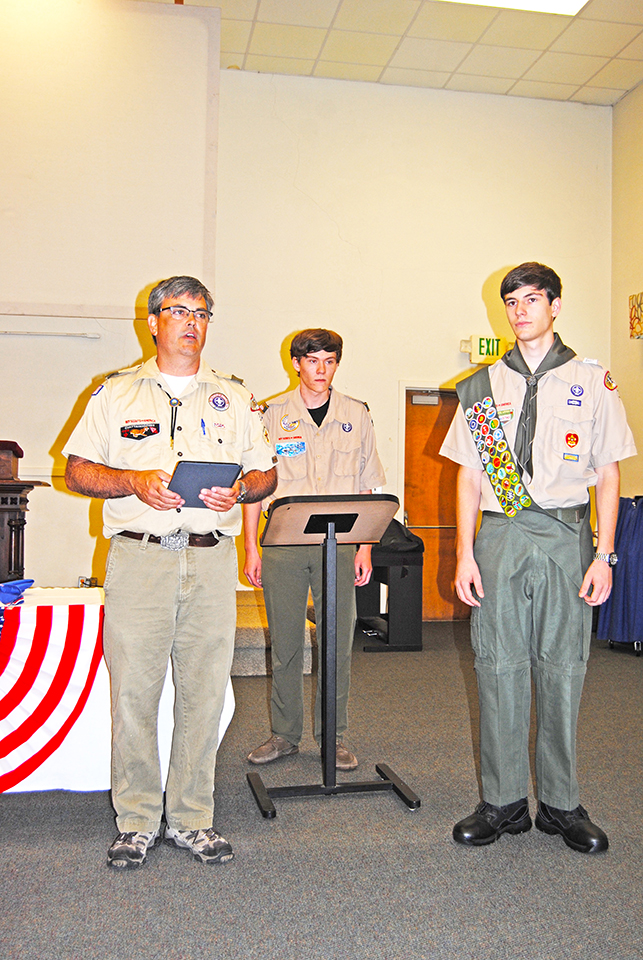 Peter Kambeitz was recognized in front of his fellow Scout members and leaders, family members and friends.

“We are real, real proud of him,” said Scoutmaster Joel Finlay. “He’s gone camping with us lot of times. He’s probably slept on the hard ground 140 times. He’s gone snow skiing and water skiing several times and has gone into the Okefenokee Swamp. He is very humble and an ideal young man. We’ve been very fortunate to have him in our troop.”

Eagle Scout is the highest rank attainable in the Boy Scouting program of the Boy Scouts of America. The designation began over one hundred years ago and since that time, only around four percent of the boys who become active in scouting earn that rank. There’s a lengthy review process involved. The Scout must have earned at least 21 merit badges, must have exhibited Scout Spirit through an ideal attitude based on the Scout Oath and Law, service and leadership. This includes an extensive service project the Scout plans, organizes, leads and manages.

Peter’s project was to build a raised bed garden for the Lanett Senior Center. It’s located just outside the L.B. Sykes Recreation Center in Lanett. It has been maintained by Lanett seniors for a second summer now.

They very much enjoy working the garden and harvesting the vegetables it produces.

“We now have a higher set of expectations from you now that you are an Eagle Scout,” said Finlay.

As part of the ceremony, Peter received the Eagle Badge from his mother and presented an Eagle tie tack to his dad.

“I want to thank you all for supporting me,” Peter told the crowd. “As much as you care for me, I care more for you.”