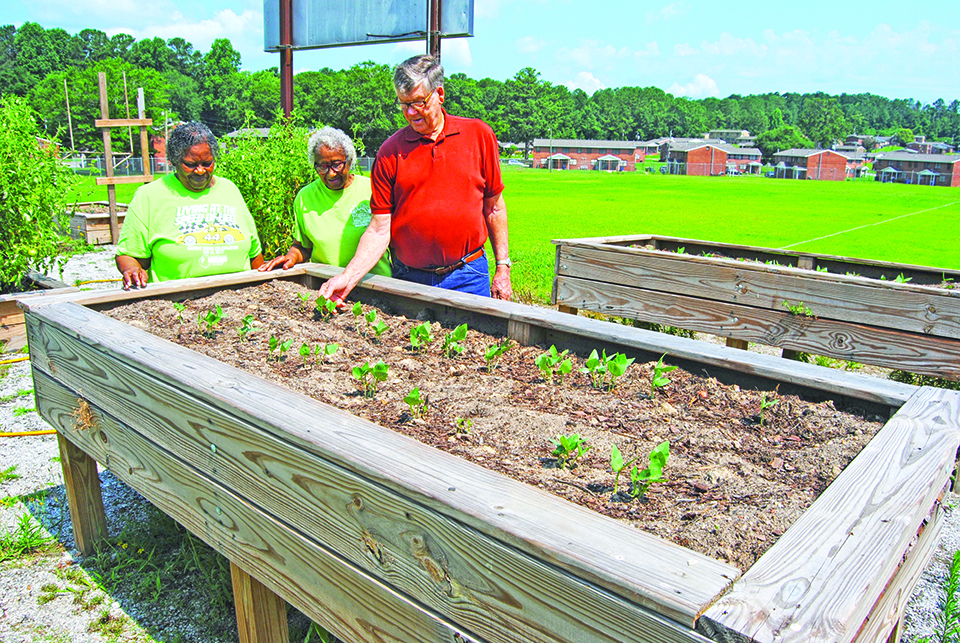 THE PEAS ARE COMING UP — From left, Annette Towles, Annie T. Bailey and Floyd Aikens inspect the pea plants that are coming up in their raised bed garden behind the Lanett Senior Center. “If we get some more showers, they should be ready to pick in September,” Aikens said. “We have four beds of peas coming up right now. We’ll have six beds of greens this fall."

LANETT — The project local Boy Scout Peter Kambeitz did two years ago as part of becoming an Eagle Scout has proven to be a bonanza for Lanett seniors.

Kambeitz built a raised-bed garden behind the Lanett Senior Center, and the seniors have really taken to it. They are in the second season of having a very productive garden a short walk outside the center where they meet five days a week. The six separate beds he built have produced one good crop after another.

“Last year we had squash, peas, collards and turnip greens,” said Floyd Aikens, who’s taken a leadership role in tending the garden and harvesting the vegetables. “This year we’ve had that again along with tomatoes, pepper and beans. It’s been a good thing for us. Everyone has gotten something twice.”

He added the garden will yield three crops this year, one in the spring, summer and fall.

Aikens, who is in his early eighties, is a cancer survivor and loves gardening. It’s something that comes natural to him since he was raised in the country. He grew up in northwest Chambers County near the Milltown community. He’s a retired minister, having pastored Happy Valley Baptist Church for 18 years.

“We had a good crop of squash this year,” he said. “We must have gotten 30 pounds of them. We also had a lot of beans. The peas are coming up now. We will be picking them in September. When they die down we will plant greens and collards for a fall garden. It’s nice to have beds that will give you three crops in one year.”

Floyd and wife Floy are very active in the Lanett Senior Center.

They have been married for 63 years, have two grown sons and several grandchildren.

One of their sons, Randall, lives in Lanett and works for Batson-Cook.

The other son, Anthony, is a school administrator in the Griffin, Ga. area.

“Anthony has twin daughters,” Mr. Aikens said. “One just graduated from UAB and the other is in the Navy.”

He said that it’s gratifying for his love of gardening to be benefiting fellow members of the senior center.

“We’ve got some Better Boy tomatoes out there now,” he said. “We pick them on Mondays, Wednesdays and Fridays. We got nine of them yesterday. If we get a few more showers, we will have a lot of peas come September. We all love our garden, and there’s a lot of cooperation in taking care of it.”