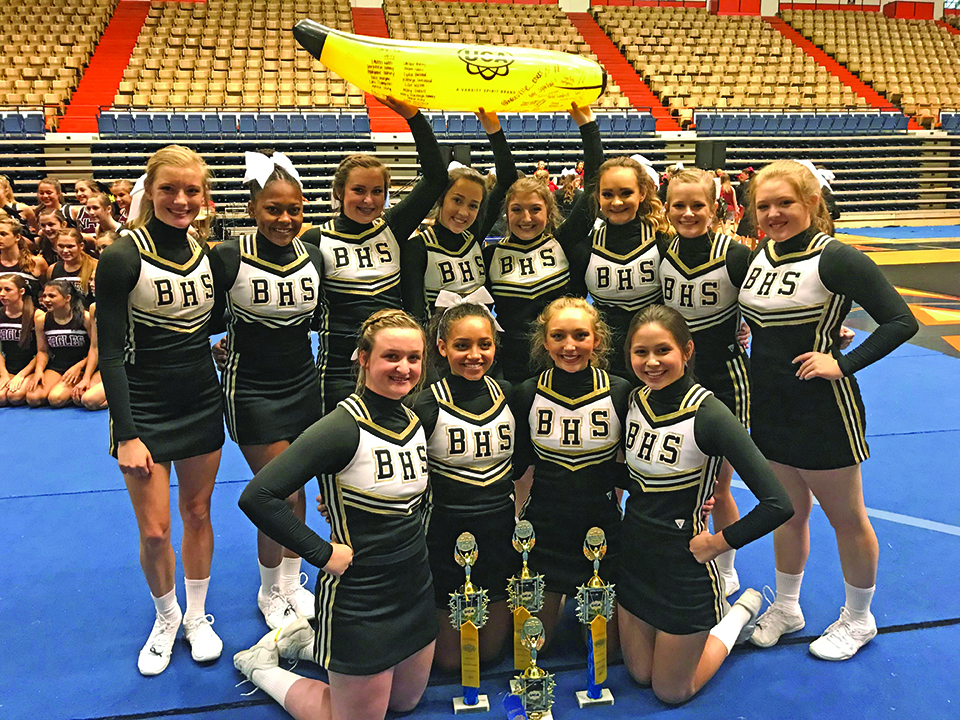 VALLEY — The Beulah cheerleading program only goes to one camp a year. A couple of weeks ago at Auburn, the Bobcats made sure 2018 counted.

Both the junior high and varsity squads won the overall first place in their respective divisions during the June 11-13 event.

“I’m totally ecstatic,” JV Cheerleading Coach Laura Sharpe said. “I told the girls all week that my focus was for them to have fun. If they didn’t have fun, then there was no point in us being there as a squad. Just to see them go out there and have the biggest smiles on their faces and see our names called out in first place for almost every category except for one, to see how excited the girls were really made my heart happy as a coach.”

Last year was the first time the junior high squad joined Beulah’s varsity team at the Auburn Universal Cheerleaders Association camp. In past summers, the team usually brought in an instructor to come to Beulah, Sharpe said. During the 2017 camp, the junior high squad finished second or third in almost every category.

“They’ve definitely shown a lot of improvement from last year,” Sharpe said. “Big shout out to the girls discipline wise and really staying focused but we saw a big improvement in junior high, even since last year.”

Bringing the junior high squad along with the Bobcats varsity team to the camp helped bridge a gap between the two. Another step that has been taken to ensure the bond among both age groups remains strong is assigning each junior high teammate to a varsity “big sister” to mentor. Every camp and towards the end of each year, the junior high and varsity cheerleaders exchange gifts with each other.

“The junior high girls love the varsity girls and vice versa,” Sharpe said. “The [junior high team] really look up to them so we really focus on using them as positive role models for the younger girls.”

Teel, Thomas and Kensley Kirby were recognized in the Pin It Forward ceremony from the varsity team, while Higdon and Abrianna Green were acknowledged from the junior high side.

The Beulah cheerleading program had more opportunities to participate in more camps but the Bobcats elect to attend the Auburn one because of how organized the event is and because all camps cost money.

At every Beulah home game this season, the cheerleaders will continue to fundraise so the program can order uniforms and attend future camps by selling souvenirs and other merchandise. Anyone who wishes to donate to the program before the season starts is encouraged to call the high school at 334-705-6020 directly and ask to donate.

“It’s important for the girls to have that gear that makes them all look alike and makes them have confidence in themselves,” Sharpe said. “It really is a confidence-booster, especially going into camp. Without these fundraisers, we wouldn’t be able to go anywhere to learn new material throughout the year, and we wouldn’t be able to have these team-building activities throughout camp. The girls’ favorite part is to go to camp and that’s all possible through our fundraisers and our donors.”