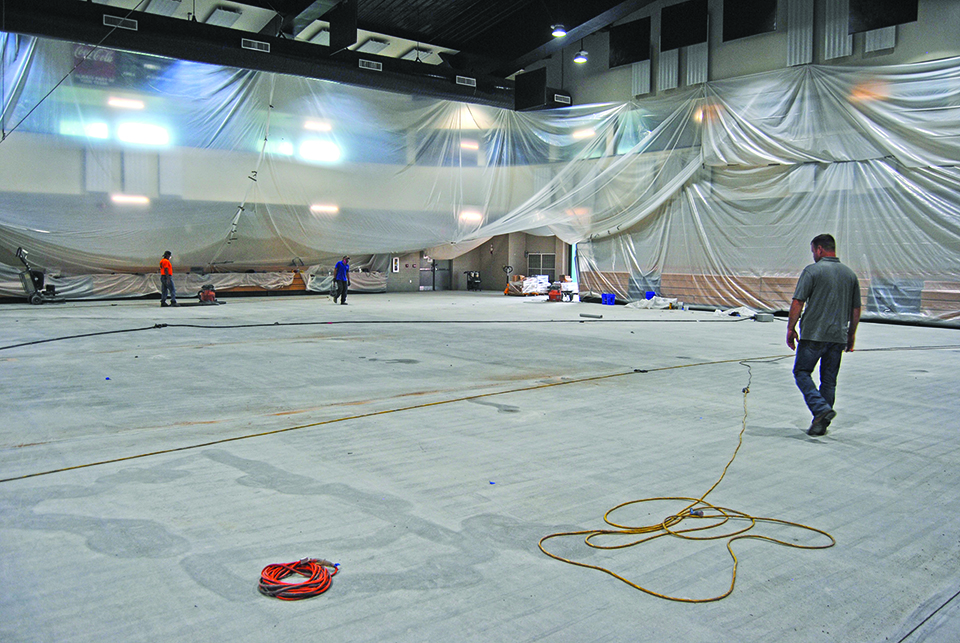 VALLEY — The Community Room at Valley Community Center has been closed for the past couple of weeks to install a new floor. The project is about halfway through and should be finished by mid to late August at the earliest

Blackwell, Inc. of LaGrange, Ga. has been hired by the city of Valley to take out the old floor and put in a new one. The biggest single task thus far has been to take out some metal electrical boxes that were built into the concrete floor. When the Community Center was built in 2002, some 29 of those boxes were built into the floor. They were to serve as electrical outlets for various events that would be taking place inside the big gym. At that time there was no way to know how many were needed. In additional to those electoral hookups that were in the floor, a number of wall outlets were installed as well.

“We just don’t need 29 outlets in the floor,” Valley Parks and Recreation Director Laurie Blount said. “We are reducing that number to 14. The old boxes are being sanded down to be level with the floor. We also had to repair some cracks in the concrete floor.”

Blount said that the sanding portion of the work was winding down. The next phase is to paint the floor. “They will be using two types of paint, epoxy and polyurethane,” she said. “Another firm, Graham, will be coming in to put down the lines. It will be really smooth when all the work is done.”

It was pretty obvious that some major work needed to be done when some big chunks of concrete were coming up next to the electrical boxes.

“We should be able to open the gym in several weeks,” Blount said. “We will have to wait until the painting is finished and has had time to dry thoroughly. We don’t need to mess it up by letting people go on it before it is completely dry.”

The painting will have marked off courses for basketball, volleyball, pickleball and shuffleboard.

“All of the playing areas will be very smooth.” Blount said. “They should be in great shape when we host the State Masters Games in October.”

Valley should make a very good impression with a like-new Community Room and a brand new Senior Center. The State Games will take place in Valley October 15-18. Up to 500 Alabama residents in the 55 and older age group participate in the State Games.

“We will have some events, perhaps pool and table tennis, inside the new Senior Center,” Blount said.

The second-floor walking track has been open in recent days.

“If the dust from the sanding doesn’t bother them we let people walk on the track,” Blount said. “We will have it closed when they are doing the painting. We are told that it will have a very strong odor.”