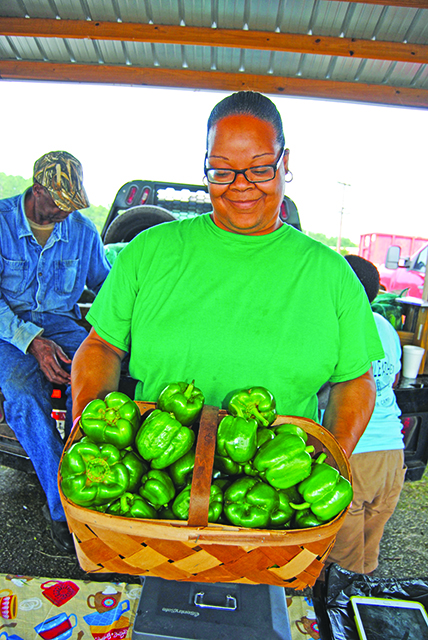 VALLEY — This hasn’t been the best of years for east Alabama farmers.

Rainfall is a hit or miss thing; sometimes there’s too much of it and other times not enough. Cold nights lingering into spring can also affect crop production, and sometimes the county work crews that spray the roadsides with herbicide can have a bad effect on crops.

Those were the responses of some of the farmers interviewed at Friday’s session of the Valley Farmers’ Market. The crowds have been picking up in recent weeks. One of the biggest promotions of the year – Free Tomato Sandwich Day – takes place next Friday. It usually has a good turnout.

State Rep. Isaac Whorton, Police Chief Tommy Weldon, Valley Council Member Paul Story and Ray Edwards, a former member of the council, will be there to make the sandwiches. The vendors will supply the tomatoes and Givorns the bread and mayonnaise.

When asked what crops had been growing well on his farm this year, Bill Carson of Carson’s Farms, Wadley, joked that weed and cockleburs had been doing best.

“We had a great year last year,” he said. “We had over 80 inches of rain. We’re down to around 30 inches this year. What really hurt us was the hot/cold spring we had. One night the temperature would be in the 30s and the next night it might be 70. We lost a lot of tomato plants.”

Walter Pulliam, who’s been farming near LaFayette since 1974, said he’s had a pretty good year so far.

“The red potatoes have done really good,” he said. “I’m still digging them up. We had a late frost that set us back some, but the okra is starting to come on.”

Pulliam credits his grandfather, Jim Finley, and his mother, Veola Pulliam, for giving him his love of farming.

“When I was growing up, my mother always had a big garden. I had one right next to hers to see if I could out-do her,” he said.

“This has not been a good year for farming,” added Ora Finley of Camp Hill, who’s been around farming all his life. “I’m now in my fourth planting and the crops are just getting ready.”

Finley is looking forward to his fall garden.

“We’ll have collards, turnips, rutabagas and kale,” he said.

Jimmy Dykes of Beulah has a pretty good corn crop coming in, but growing corn is something he’s an expert at.

“I’ve been growing corn since I was 18, and I’m 61 now,” he said. “People have always called me the corn man. It’s my passion, and I learned it the hard way. All I grow is a hybrid variety of it.”

Will Hadaway of Hadaway’s Good Little Farm in the Penton community got set back in a big way this year with some roadside spraying by the Chambers County Highway Department.

“We lost 164 tomato plants because of spraying,” he said. “Spraying can kill tomato plants from a half mile away. They got within 150 feet of my plants.”

Hadaway is hopeful of having some late crops coming in this year.

Mac Wilson of Notasulga brought a truckload of huge watermelons to Friday’s session of the Farmers’ Market. When it comes to growing watermelons, he is very knowledgeable. He has a Ph.D. in horticulture from the University of Illinois, taught the subject at the college level for 30 years and has done much research on the subject, once taking a trip to Romania for that purpose.

“I’ve been working with Crimson Sweets for years,” he said, when asked how he got his watermelons to grow to such impressive size.

Steele Farms of Shorter, Alabama had one of the most impressive tables at Friday’s market. It was filled with tomatoes, squash, okra, red potatoes, pepper, watermelons and pole beans.

Randall and Laura McClellan of Circle M Farms, Fredonia, are doing well in selling their pepper jelly. They have three varieties – peach, regular and blueberry – and they are all delicious. They have samples where shoppers can judge for themselves. They also have some chocolate zucchini bread that’s really good.

Beehive Farms of Camp Hill had clover and wildflower honey for sale. When asked what was the difference, Riley Mann explained that clover honey blooms early and the wildflower kind is from the mid to late summer of the year.

“We’ve had a pretty good year for honey even though we have lost a lot of bees,” he said. “The bee population has been going down, and no one knows why.”