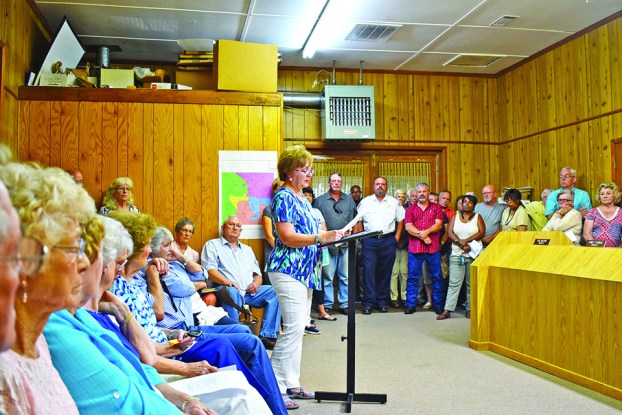 LaFAYETTE — Even with another row of chairs added, the city council chamber was  standing room only Monday night as concerned residents flooded in to voice their concerns.

The issue being addressed related to the new city park that is undergoing development. City residents had been informed  that an entrance to the park was set to go through the historic LaFayette Cemetery and came out in droves to ask the city council to reconsider.

Resident Harriet Jones led the charge, speaking for the group from the lectern.

“It is our understanding that this is a done deal, but we are here to plead with you to reconsider your plans,” Jones said. “Please think about the concerns of these citizens.”

The concerns varied from traffic worries to upkeep requirements. Jones outlined to the council how the influx in traffic caused by a park entrance would not only disturb those who were burying loved ones during funerals, but ruin the work of dedicated volunteers who keep the cemetery clean.

“It would be detrimental to the peace and comfort of the people burying their cherished family members,” she said. “The people who are here tonight either have people buried in the LaFayette cemetery, or they plan to be buried there themselves.”

The city takes care of grass and weed cutting, but donations are used to handle things like shrub upkeep, rod iron fence repair and fire ant disposal. If the road passing through the cemetery became more frequently used, the citizens felt this would require that work to increase several times over.

When Jones concluded her lengthy plea, the council responded in turn.

“As mayor of the city of LaFayette, someone in this group has knowledge that I’m not even aware of,” Mayor Barry Moody said. “No decision has been made to go through the cemetery.”

The mayor then asked the rest of the council if they had been made aware of any plans to use the road running through the cemetery. The entire council said they had not.

“Myself, Councilmember [Toney] Thomas and Councilmember [Neal] McCurdy, we are members of the Parks and Recreations Committee and we have not, nor has the mayor, decided on going through the city cemetery,” Councilmember Michael Ellis said. “That’s not what I wanted, that’s not what we agreed on. We have not even discussed that in a while. That’s not happening as far as I’m concerned.”

The council and Mayor Moody thanked those who came to express their concerns and assured them that they would be transparent with the park’s plans as they were developed.

In other action, a Community Development Block Grant request for Phase 2 of water system renovation primarily along 2nd Avenue was approved.

Beulah 8U All-Star team to play at World Series

BEULAH — The Beulah 7U All-Star team walked off the field at last year’s state championship winless in the final... read more