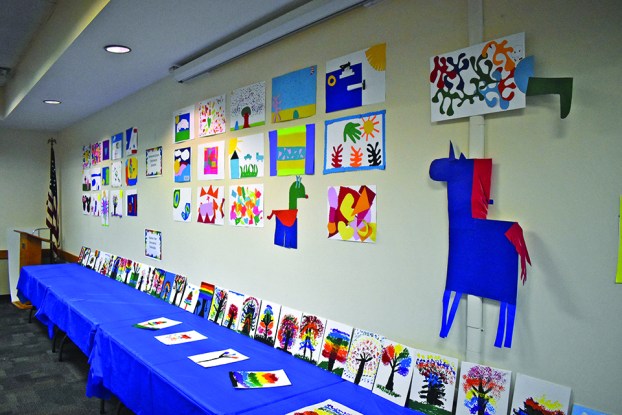 CREATED BY KIDS: This is just some of the art displayed at the Art Week reception held Friday at Bradshaw-Chambers County Library

VALLEY — The Chambers County Bradshaw library always has plenty of books, posters and computer screens to look at, but on Friday afternoon all eyes were on art created by local kids.

Every day over the last week, kids have filled the library meeting room as they painted, sketched, cut, drew and glued. It was the first annual Art Week and Friday was the date of the final reception.

Since each day of Art Week had the kids learning a new art skill or style, the pieces were exhibited in groups. One wall was covered in watercolor art the kids learned from local artist Becky Guinn, one showed off the galaxy style paintings the kids gleaned from Pam Willis and another had the cut-and-paste paper art taught by Suzie Britt.

“Galaxy day was my favorite because I got to do everything,” said Ashlyn Barnes, a young artist displaying her work. “We splattered paint everywhere.”

Barnes and the other kids gained a week’s worth of knowledge on how to create, but they also learned a lot about the kind of philosophy that comes with creativity.

“I learned that there’s no right or wrong way to do art,” Barnes said.

Barnes’ mother came out to see what she had been working on and seemed as excited about the creations as her daughter had been when creating them.

“This was something that I enrolled her in because I thought it would tap into something that she would really enjoy, and she really did,” Theressa Barnes said. “I would sign her up for it again.”

According to program coordinator Jade Letson, allowing parents to see all the hard work their kids put in was the goal of the reception.

“This kind of brings it together for the parents because of lot of them did not stay with their kids,” she said. “I think it’s really neat for them to come in and be able to say “oh my gosh this is what they’ve been doing all week.’ It’s exciting for [the kids] to bring their families in to see it all, too.”

Art week was largely considered a success by those that put it on and those that participated.

“From this week I’ve learned that people absolutely love art. I want to take the same project into my afternoon story time and other programs,” Letson said. “That’s the good thing about art week, even I learned some things that I’ll be able to carry throughout the year with our programs. Kids love art.”

City of Valley paving near completion

VALLEY — An active year of road paving in the city of Valley was near completion on Friday. Work crews... read more