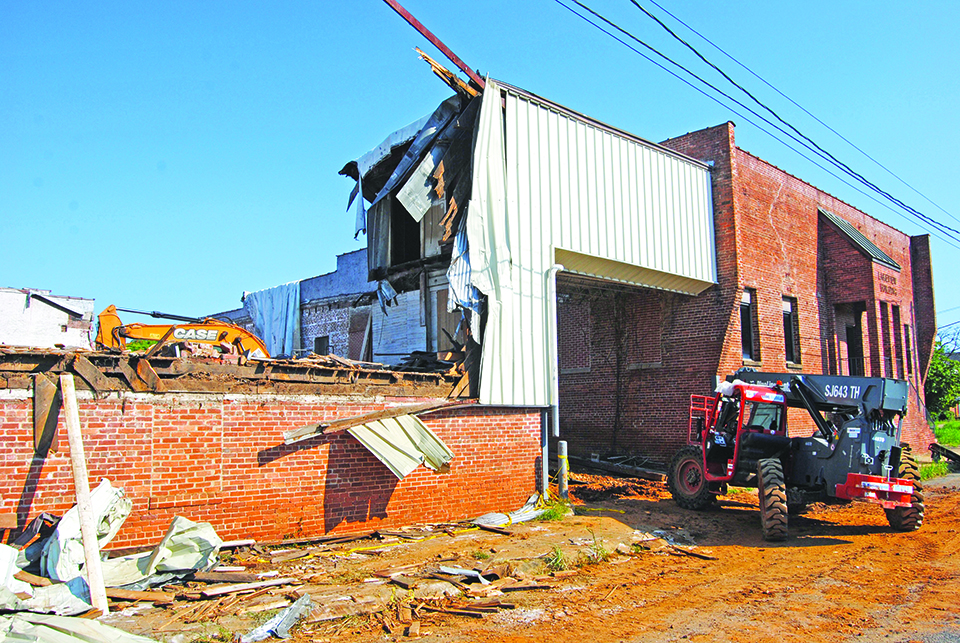 HISTORIC BUILDING COMING DOWN — The left side of the Lakeview Building in downtown West Point is coming down. What’s been demolished thus far is the wood and metal porition on the left side. The brick portion on the right and the familiar curved wall on the back side are still there, The Lakeview Building was the long-time location for the West Point Wholesale Grocery, which was organized in 1897.

WEST POINT — Some demolition work has been going on this week at one of West Point’s most architecturally interesting buildings.

Built in the late 1890s, the Lakeview Building has been a familiar feature in West Point but has been in a declining state for some time. A middle section of the roof collapsed in recent years, and over the past few weeks some work has been going on in that section of the building to remove debris and assess the remaining parts of the building.

The Lakeview Building is best known for the curved wall on the back left side. At one time, rail cars could be backed up an incline and unloaded into the West Point Wholesale Grocery, which was located there for many years. The curve was a clever means of getting goods inside the building while keeping the structure entirely in the state of Georgia, thereby avoiding paying taxes in two states. The Georgia-Alabama line runs in an alley just behind the building.

Mayor Steve Tramell said he was hopeful the curved wall could be preserved and be part of new construction that could take place there.

John J. Hagedorn II (1880-1943) organized West Point Wholesale Grocery in 1897, and the building operated in the location for many years.

In more recent times the business was run by the late Al Hagedorn.

Cobb Memorial Archives has photos from floods in the 1940s and in 1961 that shows the building surrounded by water from the Chattahoochee River.

For many years, huge bold letters at the top of the building’s exterior proclaimed: “West Point Wholesale Grocery, Dependable Merchandise Since 1899.” There was similar huge lettering along the curved wall on the building’s back side.

According to Cobb Archives records, current AuburnBank Valley Branch President Terrell E. Bishop appraised the building at $250,000 in 1983. At the time, the 22,800-square-foot building had recently undergone some extensive remodeling to enhance its value.

“The physical condition of the subject structure is rated very good,” reads the 1983 appraisal. “It has been well maintained through the years and the recently completed renovation project was a significant step toward enhancing the subject’s functional utility as well as its market value.”