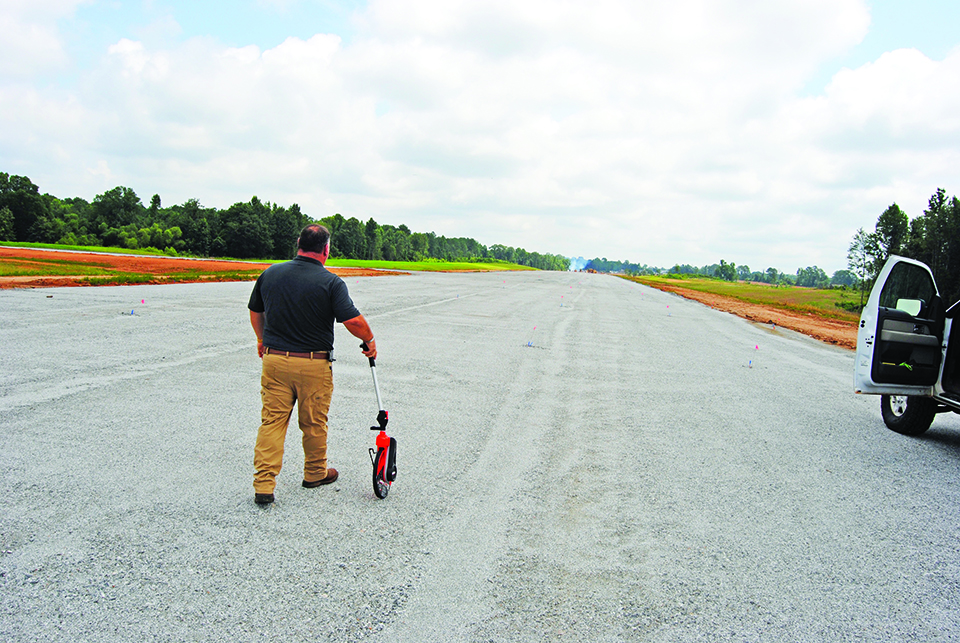 A QUICK WAY TO MEASURE — Lanett Planning and Development Director Tony Chandler has a quick way to measure short distances. The wheel he’s using can determine in seconds that the airport runway is 75 feet across. A long walk from one end of the runway to the other would show that it’s 4,400 feet. (But that’s not the best way to measure it). One of the best tools to use in this kind of work is the drone. Engineers can do some amaziing things with them these days.

LANETT — A major runway expansion is under way at the Lanett Municipal Airport.

Despite more-than-normal rainfall during the spring and summer seasons, the work is on track to have the airport reopened by late December or early January. The new runway will be 4,400 feet in length, or some 1,100 feet longer than the previous one.

At its Monday meeting, the Lanett City Council approved a resolution to seek funding for a new access road to the airport. If funding is approved, the new road would exit off Phillips Road near the Hampton Inn and go directly to the airport’s terminal area. The new road would be approximately 6,100 feet in length. A total of just over $4.1 million is being sought. Eighty percent of the funding, or around $3.3 million, would come through the U.S. Department of Transportation’s BUILD Discretionary Program. The city would provide 20 percent of the total, or close to $835,000.

The project would include design, acquisition, environmental mitigation, construction along with construction engineering and inspection.

Louise Campbell will serve as the city’s grant writer for this project.

Phase I of the runway expansion project is winding down. According to Lanett Planning and Development Director Tony Chandler, the placement of the aggregate mix is just about complete. A tar sealant will be going on top of that over a two-week period. The asphalt will be applied after that. Evergreen Erosion of Opelika was recently awarded the bid to take care of Phase II.

“That will be a lot of asphalt!” Chandler said, noting that it will cover an area 4,400 feet long and 75 feet wide with four inches of thickness.

Newell is a major player in the road construction business.

“At the height of their work they had at least 40 people out here every day,” Chandler said. “They worked from sunup till sundown, and some of them slept in trailers on the site. The next morning at sunup they’d be back on their dozers, graders and track hoes, clearing the site.”

The city owns 356 acres at the airport site, 104 acres of which are developed. Many trees have been removed on the north end of the site. The city made approximately $150,000 on timber sales from this. This area is being leveled and will be planted with grass.

It’s possible to expand the runway another 900 feet or so.

A complex of buildings at the airport includes a large maintenance hangar and terminal along with 10 t-hangars where planes are stored. It’s possible the south end of the old runway can be graded and more T-hangars built on the site. A new terminal could be built between that space and the new runway.

“It would be an ideal place to have it,” Chandler said. “It would be much closer to the runway than the present terminal.”

A tremendous amount of work has been done to get the new runway where it is. Two beaver ponds had to be removed.

“One of them had to be ten acres,” Chandler said. “It was one of the biggest beaver ponds I’ve ever seen.”

Four large concrete culverts are under the runway for drainage.

“We’ve come a long way out here since last October,” Chandler added. “Even with all the rain we had, we’re still looking at a late December/early January opening. The paving will take around three months. We’ll also have to put in the striping and the lights.”

There’s a lot of activity going on around the maintenance hangar. The city’s Cemetery & Grounds Department is headquartered there, and work crews are coming and going on most days. Two fire trucks are being kept on the site. One is inside the big hangar. A new metal-fabricated shelter is being built to house the second one.