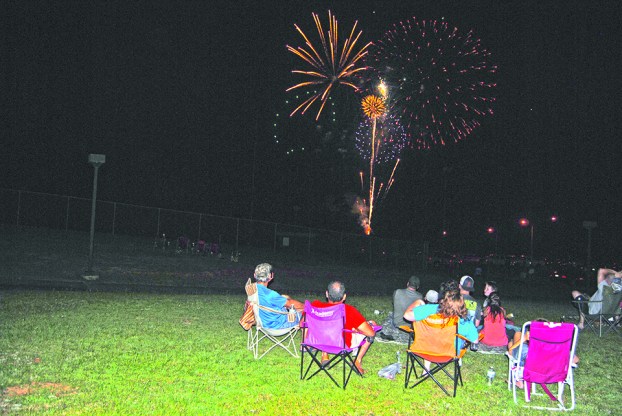 THE GRAND FINALE — There were lots of oohs and aahs followed by loud applause as the annual City of Valley fieworks show concluded at around 10:15 p.m. on Wednesday. As he always does, Casey Chambley put on a good show for another big crowd. The rockets being fired from the industrial park site helps with crowd congestion and fewer traffic tie ups when leaving. People coming to the show have options of watching form the Community Center/Sportsplex area, and places along both Fob James Drive and Valley Industrial Drive.

With the exception of a few years when the weather was either too stormy or too dry, fireworks shows have been going on in Valley every July 4 since the Sportsplex opened on July 4, 1996. Wednesday’s weather was ideal, and the show went on as planned. It started at 9:50 p.m. and concluded around 10:15 p.m. Once again, Casey Chambley put on a good show for a big crowd. People watched from parking lots in front of the Community Center and near the Sportsplex, the bank behind Ram Stadium and the shoulders along Fob James Drive and Valley Industrial Drive.

Retired firefighter Kelly Meecham was with a big group of family and friends parked alongside Fob James Drive. In a festive, patriotic mood, they displayed two large U.S. flags.

“This is a great place to watch the show,” he said. “It’s also a good place to get out early and beat the crowd. We’ve enjoyed these shows for years, and now we’re bringing the little ones to see it.”

For a second straight year, a large group of people saw the show from along Valley Industrial Drive. This may have been the best vantage point since the colorful rockets were launched from an open field in the city’s new industrial park.

“This is a great place to see it,” said Madison Bush, who watched it with a large group of friends. “We watched it here last year.”

Valley native Allyson Brandt came all the way from Sterling Heights, Mich. to visit her parents, Charles and Beverly Story, and to take her children to see the fireworks.

Bobby and Marianne Elliott like to watch the fireworks show from the parking lot in front of Valley Community Center.

“This is our spot,” said Mr. Elliott. “We like to watch it from this area when it’s at the Sportsplex.”

“When the fireworks show is at the airport,” said Mrs. Elliott, “we like to watch it from the hill behind the hospital. That’s a good place to see it. The fireworks reflects off the river.”

Refuge Point Pastor Matthew Thrower and family liked the view from the big bank just outside Ram Stadium. The colorful aerial explosions and the thunderous sound had a big wow! effect for everyone.

The fireworks show capped off a big day at the Community Center. There was a senior swim at 11 a.m. followed by a three-hour free swim starting at noon.

VALLEY — For the Valley Sportsplex youth baseball league, this past season has been fruitful. The league is sending four... read more