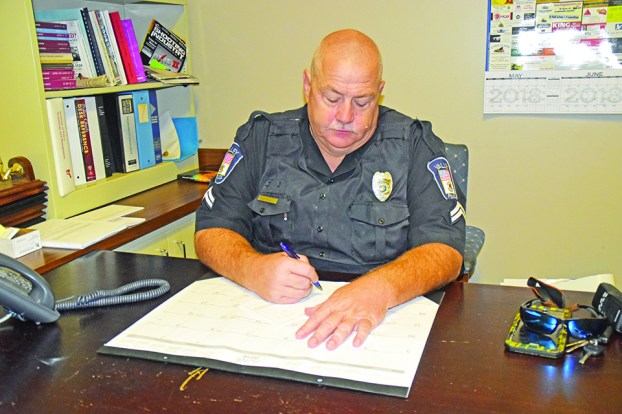 Steven Thomas | Times-News a passion for police work: Corporal David Gearld Smith of the Valley Police Department came back to his position after a time.

VALLEY — Not many people can say they have left a job only to come back to it more than a decade later, but Corporal David Gearld Smith of the Valley Police Department can.

Smith started out as a Valley officer in 1988 after attending a career day a few years prior.

“I gave up a supervisor’s position in the mill,” he said, noting he grew up with the Sheriff’s Department and State Troopers as the only law enforcement in the area. “I said ‘I’m done. I want to go work for the police.’”

However in 1985, in an effort to better take care of his children, Smith left the department to take a job with the mills.

“I got back into it [police work] when the mills started shutting down,” he said. “I’ve got a degree in industrial electricity and electronics that I got in the 12 years I was out.”

He returned to police work in 1997, a decision he said was helped along by his now-older kids.

“I missed this,” he said, noting he missed being able to help people out and the sense of family and friendship he had with his fellow officers.

“I gave it up, thinking I wouldn’t get back in it and those 12 years I was out were the most miserable years. I missed it. I missed helping people.”

Smith noted that where some officers despise directing traffic, he loves it, and that passion for the job is what he lives for.

He also met his first wife, Beth, who was a dispatcher at the time they met, through the department. The pair had two children: Zachery and Andrew.

Tragically, Beth passed away due to complications with a liver transplant after 19 years of marriage. Smith has since remarried. His current wife, Gina, brought children into their marriage and together the pair have three grandchildren: Jax, Kacine and Tyler.

The corporal noted that his return coincided with the start of the department-wide initiative Project Lifesaver, which works to provide alert bracelets to special needs children and the elderly with a habit of wandering off.

“I had a special interest in it because of my grandfather. He ended up passing away from complications from Alzheimer’s,” he said. “I wanted to get back where I could help people again.”

Smith was adamant about the importance of Project Lifesaver, citing some pushback from the community over worries of cost and embarrassment over having to wear a bracelet.

“It’s a great program and I think more churches and civic groups need to get involved,” he said.

As part of his everyday duties outside of Project Lifesaver, Smith works the night shift, helps file reports and works with the supervisor.

“I will patrol until I can’t patrol anymore, or until they take me away from it,” he said. “I will stay as long as I am physically able. When my body tells me it’s time to walk away, I’m going to walk away.”

VALLEY — Two times a year, vehicles are lined up along the roadway in anticipation of seeing an event in... read more