Vet to vet a safe space for vets 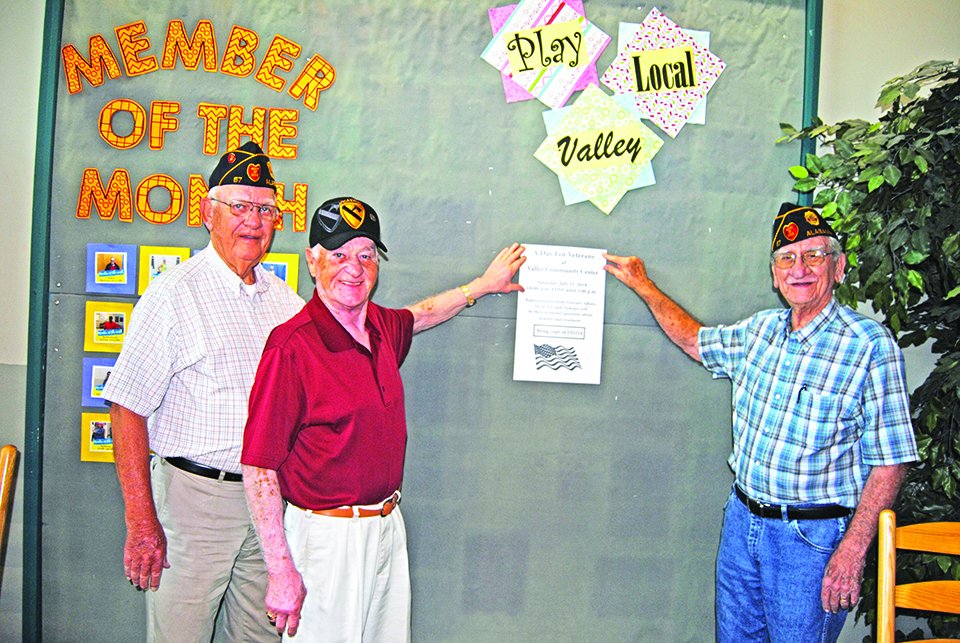 DAY FOR THE VETERAN IS SATURDAY — From left, Post Commander Lanny Bledsoe, Sam Cofield of Vet to Vet and Post Adjutant Bobby Elliott have been putting up posters around town to get out the word about Saturday’s Day for the Veteran program at Valley Community Center. It starts at 10 a.m. EDT. All local veterans are invited to come out and talk to representatives of he VA, Vet to Vet and the VA Hospital in Tuskegee about the benefits they have earned through their service.

VALLEY — Our Valley Times-News “Veteran of the Week,” Sam Cofield is a veteran of the Vietnam War who has a passion for helping fellow veterans. He has been involved in the Vet to Vet organization for the past 12 years and has headed up the Lanett chapter for the past five years. He and two other facilitators, Jim Davis and Charles Jackson, meet once a week with local veterans to talk to them about any issues they may be having because of their military service.

“People come here from the VA,” Cofield said. “We help them with their healthcare information.”

He added that everything is confidential.

Topics can range from complications some veterans are dealing with from agent orange exposure to post traumatic stress disorder, commonly called PTSD. What happens many times is that a veteran returns home and goes through another kind of stress. It’s the everyday stress that’s brought on by making a living, getting married and raising children.

Someday down the road they may have flashbacks to their war experiences.

“Veterans make up one percent of the U.S. population but account for 30 percent of the suicides,” Cofield said. “An average of 22 veterans commit suicide every day. We want to get that number down. We feel like we are helping the veterans we talk to.”

Cofield is looking forward to Saturday’s Day for the Veteran program to be held at Valley Community Center. It’s sponsored by American Legion Post 67 and will be taking place in the Bobby Crowder Room, starting at 10 a.m. EDT and continuing until mid afternoon.

“We hope to have a good turnout,” Cofield said. “We want to get the word out that there’s all kinds of help for veterans. We just want to make sure they get what they have earned through their service to our country.”

Cofield in a native of Woodland, Ala. He was stationed with the First Cavalry Division near An Che, Vietnam in 1966-67.

“I took basic training at Fort Benning and then was sent to Fort Eustis, Virginia for airborne training, he said. “After Vietnam, I was sent back to Fort Benning, where I left the Army.”

There were no parades and bands playing when the U.S. veterans came back home.

“For 25 years I had a business and never told anyone I had served in Vietnam,” Cofield said. “We were not popular. No one would hire you if you’d been in Vietnam.”

That public perception has changed over the years, but the scars remain for the veterans who experienced it.

Cofield has had some health issues over the years, possibly linked to agent orange exposure.

“Lots of Vietnam veterans have had health problems because of it,” he said. “Agent orange was everywhere. It was in the water you drank and the food you ate.”

“I’ve been teaching classes for the past five years,” he said. “We examine every sentence in the book we teach from. We want everyone to understand how we are trying to help them.”

He wants everyone participating in the program to understand that it’s highly confidential.

“What’s spoken in the room stays in the room,” he said. “No one ever talks about it when we leave.”