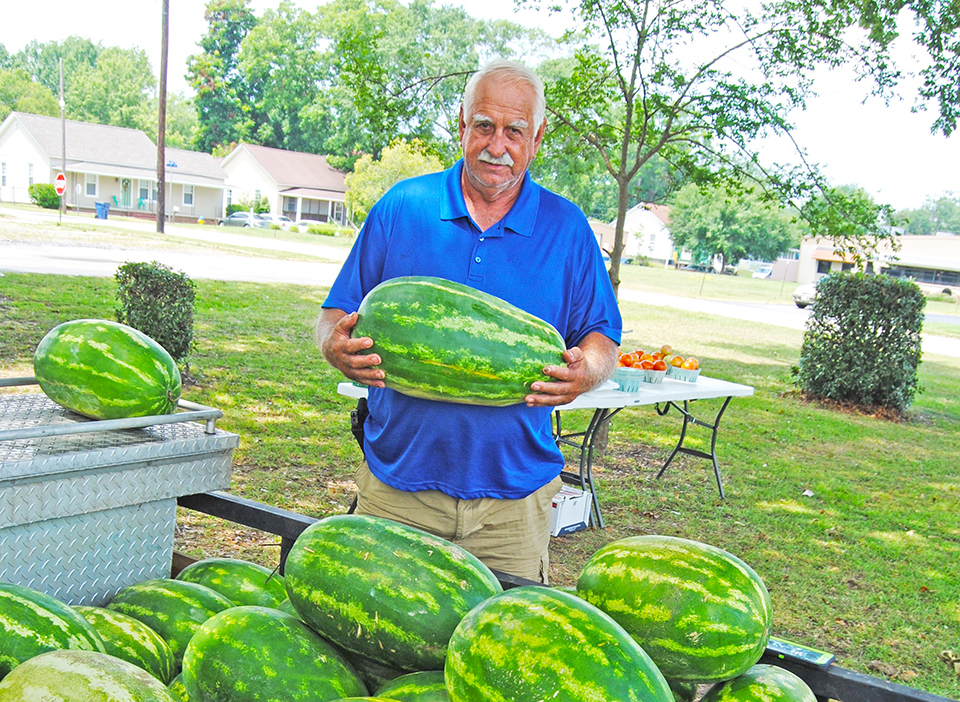 LANETT — Verbon White has found a way to cure the restlessness brought on by retirement – start a roadside fruit and vegetable stand. That’s what he’s been doing this summer, and he loves it.

“I enjoy it,” he told The Valley Times-News. “It gives me something to do, and I meet so many people.”

The main item he sells are watermelons. He buys them from the farmers’ market in Cordele, Ga., widely known as the watermelon capital of the world.

“My customers are always telling me that the watermelons they buy in roadside markets are better than the ones they get in the big stores,” he said.

The ones purchased from roadside stands were probably picked in the last day or two; the ones in the big grocery stores may have been picked weeks ago.

White said that people are always complimenting him on his tomatoes. They are mountain grown on Hughes Farms near Graysville, Tenn. The peaches are from Fitzgerald Fruit Farms in Woodbury, Ga. and the plums are from California.

“My best seller has been the Shangria watermelon,” White said. “I must have sold 2,500 of them this summer. We also have yellow meat watermelons and the seedless kind. They tell me in Cordele that it’s been a really good year for watermelons.”

White said that he doesn’t do much farming.

“My house in Five Points is on nine-tenths of an acre,” he said. “I go and buy the produce I sell.”

White has done a little bit of everything. He raised chickens for a while and then went to work for the Georgia Highway Department. He striped roads in more than 30 Georgia counties. The pay was pretty good, it kept him busy and offered health insurance, something chicken farming didn’t.

Selling watermelons by the roadside has taken White back to his youth. His dad, the late Alton White, used to sell watermelons to the public.

“I remember him going by mule and wagon to Hollis Cross Roads and selling them,” he said. “I have five brothers. There were times we’d go to Anniston and sell them door to door. My uncle would take us to Birmingham, where we’d buy the watermelons and then we’d sell them at places like Hollis Cross Roads.”

“There’s always been a market for roadside sales,” White said.

It’s a tradition that’s been handed down through the White family, and it sure beats sitting around the house doing nothing.