Candidate for sheriff arrested in Autauga 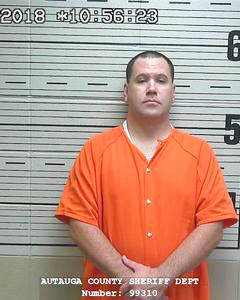 Roberts was arrested by the court bailiff at a scheduled hearing in Autauga County, which is where the child’s mother lives.

“He had a child support case with the child’s mother that was set on today’s docket,” said a spokesperson from the clerk’s office. “It was for contempt, where he had not been making his scheduled monthly payments. You can’t be bonded out on child support. He paid $1,100 in court before being booked in and then there was another $8,000 that was due to be paid for release.”

Because he didn’t have the full amount on hand, the debt he owes was transferred to Chambers County to be paid in full by 11 a.m. tomorrow morning, according to the clerk’s office and per Alabama Rules of Criminal Procedure, or risk having a warrant out for his arrest. He has since been released from jail.

Upon his release, Roberts said he was only in jail for approximately 20 minutes.

“I was not deliberately trying not to pay [the child support],” Roberts said. “My dad had gotten really sick and I was trying to help take care of my father. I got behind because of that, my dad had four major surgeries which prevented him from being able to take care of himself, and there’s no one else to take care of that. That’s the reason I got behind. When it went to court, the judge basically just wouldn’t listen to anything I had to say. He said ‘You’re behind and we are going to put you in jail.”

Roberts, 40, of Lanett is running against the current Chambers County Sheriff Sid Lockhart for the position come November. Roberts previously lost to Lockhart in 2014.

Any further details on this situation will be reported on as they come in.