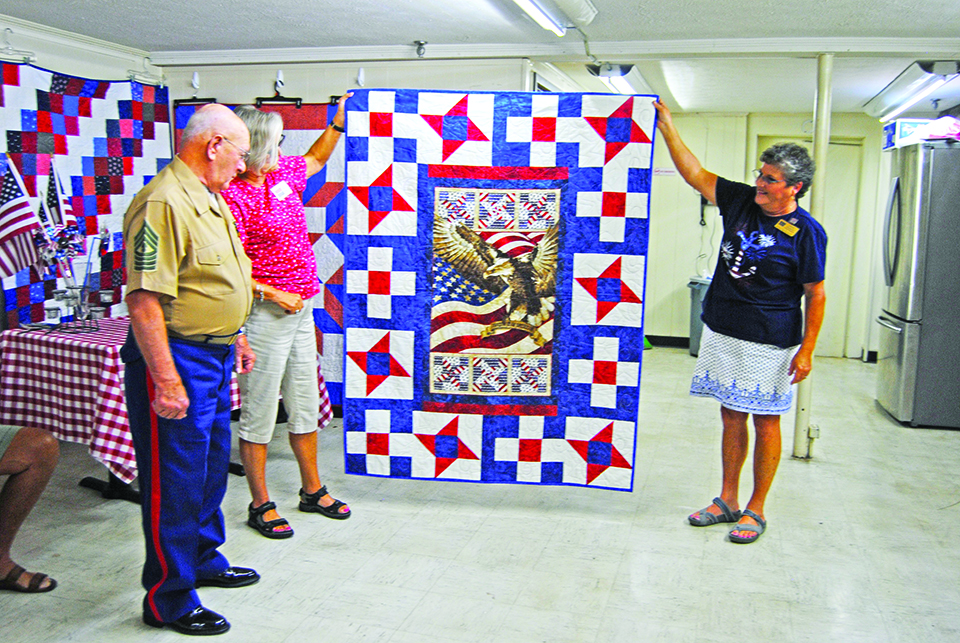 “We are pleased to have veterans who served in three branches of service,” said Sheila Simpson, program emcee. “They are from the U.S. Army, the Navy and the Marines.”

The honorees included a married couple, Allen and Traci Mapp of Beulah. Traci served both the U.S. Army and the Navy. She was a crew member aboard the USS George Washington on 9-11.

“We were on alert around the clock. There was no eating or sleeping for three days. I had friends who died that day,” she said.

Allen was deployed to Kuwait immediately after the 100-hour campaign to liberate the country from Saddam Hussein’s forces from Iraq. He was in the Marines from 1990-94 and in the Marine Reserves from October 1996 through January 2004.

Jim Hamill and Wayne Reason, both of LaGrange, had lengthy careers in the military. Reason was in the Marines for 30 years (1961-91) and retired as a master gunnery sergeant. His career spanned the U.S. involvement in Vietnam to the Persian Gulf War.

Reason wore a Marine uniform to the event and said that he’d serve again if called on. Reason saw the world as a Marine.

“I went to 34 countries in 30 years,” he said, noting he was a drill instructor on Paris Island, S.C. for a time and had two tours in Vietnam and was also involved in guarding U.S. embassies.

Hamill was in the military for 20 years, having tours of duty in Vietnam, Korea and Europe. In 1966-67, he served with a medical supply unit in Vietnam. He and his wife Patricia live in the LaGrange area today.

Quilts of Valor began in 2003 when Catherine Roberts started a quilting group while her son was serving in the Iraq War. The first presentation took place at Walter Reed Hospital. It took Roberts and her small group some three years to award their first 100 quilts. Since then the movement has grown nationwide with many local chapters. The 100,000th Quilt of Valor was presented at Water Reed in May 2014. As of this month, the total has grown to 190,737.

Quilts are presented both to veterans and active duty personnel.

“I would like for you to know that these quilts have a three-part message,” Simpson said. “First, we honor you for your service, for your willingness to leave all you held dear and to stand in harm’s way in a time of crisis for all of us. Second, we know that freedom is never free, and our Quilts are meant to say thank you for your many sacrifices.”

“Finally, these quilts offer comfort,” Simpson added. “Throughout history, when young men left home to fight in a war, many of them took a quilt that had been made for them by a family member. It was commonly called a comfort quilt. We hope when you experience dark memories or need the warmth of a hug, you will let this quilt wrap itself around you and offer both. We want you to use this quilt. It was not meant to be hung on the wall or put in a display case.”