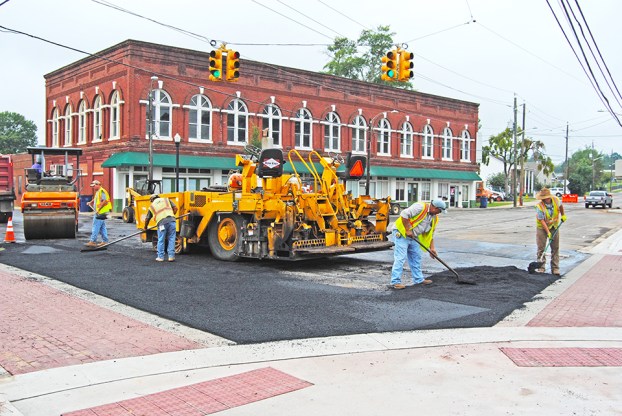 LANETT — A severe storm swept through Lanett late Wednesday evening, knocking out power in four different sections of town. The power was off in some neighborhoods for up to three hours. A roof blew off a building in the 800 block of Gilmer Avenue, bringing down power lines with it. Lanett Electrical Department crews had to re-string lines in the area to get the power flowing again. This is the part of town that’s just south of the Courthouse Annex.

“We had everything up and running again within three hours,” said Mayor Kyle McCoy. “Given the damage we had from the high winds, that was excellent. There were so many limbs down and so much debris.”

Another part of town seriously affected was the area from North 16th Street to North 18th Street and Morgan Cantey Drive.

“It was a bad storm,” said the mayor. “There was a good bit of work our guys had to do to have the power back on all over town.”

The morning after the storm, a work crew from Chris Clark Grading & Paving was in downtown Lanett paving the portion of First Street that runs through the downtown area.

“This finishes 90 percent of Phase I of our streetscape project,” McCoy said. “If the rain holds off, we should finish paving First Street.”

The mayor said a new fountain would be going in later on the downtown triangle.

“It’s separate from Phase I,” he said, “We will take care of that later.”

Phase III of the streetscape project is funded. Bids will be going out for that work in September. This will be on the west side of North Lanier Avenue from the Tanyard Creek bridge toward the Georgia state line.

Grants are being sought for Phase IV, which would be for the east side of North Lanier.

Following the paving of First Street, there’s still a good bit of road work left to do in Lanett before the end of the year.

“We have a lot to be completed on the south side,” said the mayor. “We have to do parts of South 8th Avenue, Jennings Avenue, South 14th Street, and 15th Street on the south side and North 12th Street, North 4th Avenue and the part of North 15th Street that runs in front of the Point University Living Center on the north side of town. We’d like to have all this done by the end of the year.”

VALLEY — A Lanett man was arrested by Valley police officers following an alleged month-long relationship with a minor. On... read more