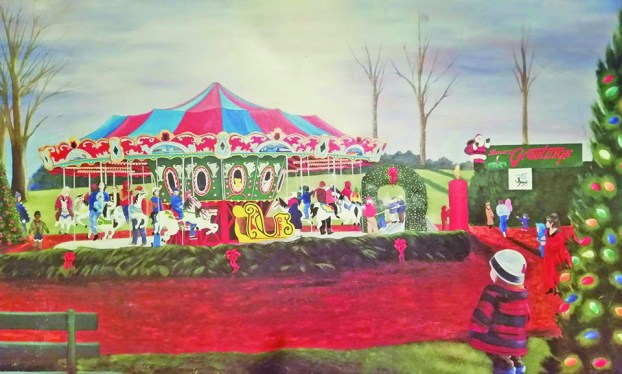 LIFE-LONG ARTIST: Tawana Bradford Henson has created this piece and many others like it that now fill the businesses, organizations and homes around the Greater Valley Area.

LANETT — Anyone who has visited a business or restaurant in the Greater Valley Area has most likely seen some of Tawana Bradford Henson’s original artwork.

Henson has been a Lanett native and an avid artist her entire life, two things she is proud of. She said that her artistry started when she was an infant, stemming from her father’s self-taught artistic abilities.

“On Sunday when the papers would come out, when I was a little girl, they had the colored funny papers in them,” she said. “I tried every week to see if I could do Beetle Bailey, Snuffy Smith and Dagwood. That’s how I started. I always knew that was what I wanted to be and God has blessed me by letting me be that.”

As she grew up she started imitating the likes of Norman Rockwell rather than Jim Davis. Studying the works of what she refers to as the “old masters” helped her develop her own style of painting.

After school she worked at WestPoint Pepperell’s corporate office until she had her second child. While raising her kids she still wanted to gain income, prompting her to sell her art pieces. People seemed to take note and enjoy her pieces to the point where creating art became her full time position.

She opened up Tawana’s Art and Frame Shop in Lanett where she sold her works and artistic supplies to her hometown. Her work in oil and watercolor was popular with people in the area and frequently sold out. Locals immediately recognize her work, especially her paint interpretation of the Valley Christmas merry-go-round.

After almost 20 years of creating and owning a business, she took a job at W.O. Lance Elementary in Lanett where she teaches second grade, third grade and special needs students how to create works of their own.

“I love teaching, love my kids,” Henson said. “It is really rewarding. Not all children are very academically inclined, not all of them are good math students, maybe can’t read well and aren’t athletes but find that they are good at art. A lot of the time they don’t know it’s something they can excel in. To see their face light up when they win a ribbon or a contest, that makes it worth it all right there.”

Her teaching doesn’t stop in the classroom, either. Henson puts on a bi-weekly instructional class titled “Kids Can Paint Too” where local kids are taught the basics of art and creation.

Henson said that she has little time to paint for fun anymore, but she is still able to work on commissions on occasion. One of her most recent pieces is on display at New Horizon Theatre for their performance of “Sleeping Beauty.”

The work of Tawana Bradford Henson is a staple of the Greater Valley Area. She said that her talent is God-given and she is glad she can share it with the community she grew up in.