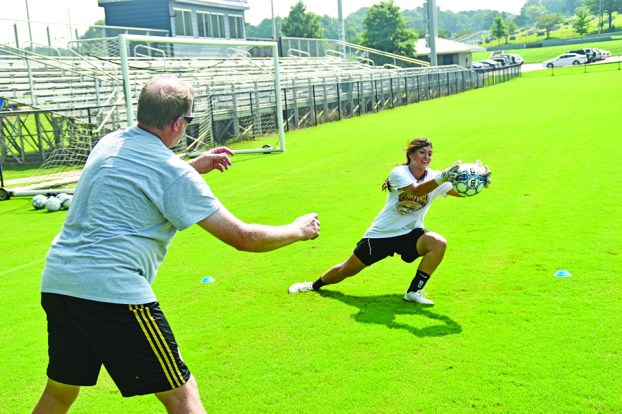 Point soccer working to get in game shape

WEST POINT — The Point University women’s soccer team is currently in the middle of its preseason training, where the team is conducting two-a-day practices. The Skyhawks have also run two miles some mornings before going through a day of practices.

“This is a sport that requires a lot of fitness,” Point University women’s soccer head coach Randy Douglas said. “We don’t have any control of what they’re doing over the summer. We can suggest, we can strongly suggest, but none of us are watching on a daily basis to see what they do. It takes a lot of character for someone to follow directions and make sure that they’re working out in the summertime, coming in tip-top shape. It happens sometimes, but other times it doesn’t.”

Conditioning is essential especially for Skyhawk midfielders, Douglas said. Last season, junior midfielder Sabria Marquez had a breakout season and led the team with 12 goals and three assists for 27 points. Marquez ranks eighth in program history with 15 career goals. Her older sister, Jasmine, is a senior midfielder and defender for the Skyhawks.

“We didn’t expect for an outside midfielder to be our leading scorer, but she had a good season and she scored on some really tough opponents that we had,” Douglas said. “Toward the end of the season, she was marked a little closer than she was at the beginning of the season. I have a feeling that’s the way it’s going to be in the early part of this season. She’ll have to be a patient, use her teammates more. Things will start opening up for her three, four games into the season.”

Point was picked to tie for sixth out of the 13 teams in the Appalachian Athletic Conference (AAC) in this season’s preseason poll. The Skyhawks finished in seventh place last season.

“I think a lot of us looked at last year as a bit of a disappointment,” Douglas said. “We had gone from fourth to third to second and we were expected to contend, but we were missing some pieces, to be honest.”

Coming back from an offseason of recruiting, Point hopes to have filled those pieces this season.

Junior center defender Alexa Gernand is a 5-foot-10-inch transfer from Polk State Community College and freshman right back defender Maria Cruz played with the 16U Mexican national team when she was younger. Gernand and Cruz will replace two starting backs that the Skyhawks lost last year.

Junior midfielder Brunella Cassalino is a transfer from Cochise College and played with the Peru 17U national team.

“Every year you put things together from the previous fall, winter and spring,” Douglas said. “We’re not there yet. We probably won’t see until five, six games into the season when we’re starting to play our conference matches but we feel like we have every opportunity to do something in this conference and represent Point in the national tournament.”

The quest to make the NAIA Tournament begins this Saturday at Faulkner University. The Skyhawks return to home on Sept. 15 to host St. Andrews University at noon in River Bowl Stadium.

LaFAYETTE — There are only two more days until game day for the Rebels of Chambers Academy. “We’re really excited,”... read more