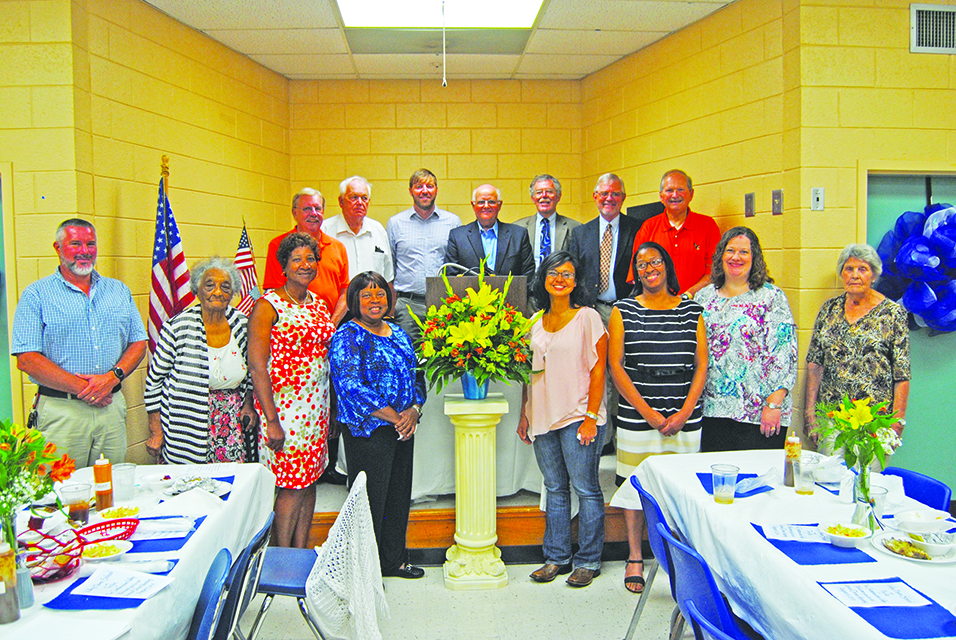 VALLEY — Valley Haven School is continuing to receive very strong support from the local community, something that allows it to have the match it needs to receive the state and federal funding it needs to continue to operate as one of the premier schools in the east-central Alabama region for children with developmental delays and adults with learning disabilities. At Thursday’s 59th annual dinner meeting, newly installed president Sam Bradford cited a critical need to keep this success story going for years to come.

“We need younger people involved in Valley Haven,” he said, citing the need for volunteers to get involved, stay with it from year to year and to work their way into leadership ranks.

“We need to get some of your grandchildren and cousins involved,” he said to a capacity crowd inside the large dining area inside Valley Haven School.

Working for pledges every year is key to the success of the annual Hike/Bike/Run.

“I can remember when I was much younger someone coming to our house, knocking on the door and asking for a donation to build a new building for Valley Haven School,” he said.

Valley Haven School started in a mill village house in Plant City in 1959. The current building went up in the mid-1970s, and the Hike/Bike/Run got started in 1977. In those first years, a few thousand dollars was raised each year. With better organization and more activities people could participate in, the Hike/Bike/Run grew in popularity and in donations. For 29 straight years now, the fundraiser has topped $100,000. The benchmark now is $120,000. That’s what’s needed locally to be eligible for the match money that’s so important for Valley Haven to continue offering the first-rate services it does.

“I want to thank all our great volunteers who help us every year,” Executive Director Craig Brown said. “This is a caring community that takes care of people in need both in good years and in bad years.”

Fundraising efforts will be going on this weekend when the 37th annual Walt Meadors Invitational Golf Tournament will be taking place at the Point University Golf and Events Center. A total of 21 teams has signed up.

Knights of Columbus representative Gene White talked about this year’s Tootsie Roll drive, which will be taking place on Saturday, Oct. 6. This will be the 41st consecutive year it has taken place. People are asked for donations and given free Tootsie Rolls for their consideration. White became emotional when he talked about a personal reason Valley Haven means so much to him.

“This school means a lot to my granddaughter and our family,” he said. “When she was a baby they told us she would not live to be two years of age. This year she walked to her holy communion at Holy Family Catholic Church. To us, anyone who supports Valley Haven School is a hero in our community. Anyone who wants to help us can pass out some Tootsie Rolls on Oct. 6.”

Hike/Bike/Run Overall Chairman Don Cleveland said that H/B/R 2018 had generated over $122,000 in pledges and that most of that had been collected.

The annual dinner ended on a humorous note with gifted storyteller Carol Cain talking about some of her misadventures while growing up in Hogansville, Ga. Cain is a retired drama teacher with the Troup County system and has entertained lots of people with her stories from venues ranging from trips on “Miss Sally,” Chattahoochee Riverkeeper’s floating classroom, to formal events. Her story involved her getting the nickname Hot Rod Howington for her ability to outrace all the girls and most of the boys at recess back at Hogansville Elementary back in the 1970s. It may have cost her a boyfriend or two, but it did give her status.

She credited two factors for this: running from her older brothers and from a rooster who ruled their yard. The hard part of winning those races was doing it in a cotton dress and Saddle Oxfords. She couldn’t outrun a boy named Tim in the fourth-grade finals, but the main point was that this was in the days of women’s lib and girls could compete with the boys. When that girl gets to high school, though, she really doesn’t care to be called Hot Rod.

Cain said this all came back to her recently when she went to do some walking at Granger Park in LaGrange.

“I asked myself if I could still run,” she said. “I gave it a shot. It was like being back in the fourth grade. I closed my eyes and started turning it on. I made one lap, and as I was starting my second one I opened my eyes and saw some of my friends walking down the hill toward me. A former coach walked up to me and told me I had good form.”

What was her reaction?

“Watch out!” she said with a big smile. “Hot Rod Howington is back!”