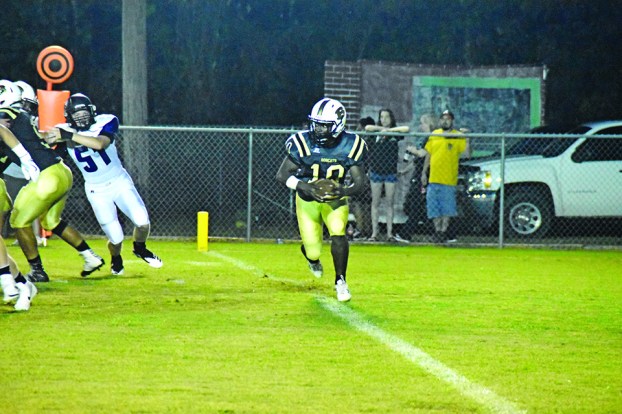 BEULAH – The Bobcats had four reasons to arrive at Beulah’s homecoming dance in a good mood on Friday night.

“I feel pretty good about it,” Beulah head football coach Cody Flournoy said about passing last season’s win total. “It’s a lot for the guys because they put in the work. They’ve been needed this around here for a long time. When I came in, I said, ‘hey, we have enough talent to be competitive, I didn’t think we’d be 4-0 but we’re definitely competitive and we’re winning some games here.”

The Bobcats struck first with an early 2-yard touchdown before the Panthers answered with a 19-yard touchdown run with 1:46 remaining in the first quarter.

Beulah junior Dashawn Jones had a red zone interception with 6:51 remaining in the second quarter. The Bobcats couldn’t capitalize on the turnover, however, as the offense went four-and-out on the ensuing drive.

Beulah was without its top linebacker and fullback Caden Dowdell, who stood on the sideline wearing a walking boot on Friday night. Prattville took advantage of Dowdell’s absence and seemingly got everything they wanted on the ground in the second quarter, despite only finishing the night with 160 rushing yards. Senior Isaiah Glidewell, senior Justin Hancock and junior Chris Person stepped up in Dowdell’s absence, with Hancock recovering a fumble and senior Quin Page grabbing another team interception in the second half.

After trading possessions in the first half, Beulah senior quarterback Lonzie Portis took three deep shots into the end zone with 36.4 seconds remaining in first half, which all fell incomplete.

Portis redeemed himself immensely in the second half.

“I hit the hole, the hole was bigger than usual, so I hit it really hard,” Portis said of his long run. “Then towards the 50, I started cramping but I just kept running and I got in the end zone.”

Portis, who said he was heading to the homecoming dance after Friday night’s game, admitted that he’s never been 4-0 in his life.

“To be 4-0 for this community, for this team, it’s just a great feeling,” he said. “My last homecoming, we went out with a win. Now I’m about to go dance and it’s going to be great.”

AUTAUGAVILLE — Before halftime even started in their fourth game of the season, Lanett was already decimating the winless Autaugaville.... read more