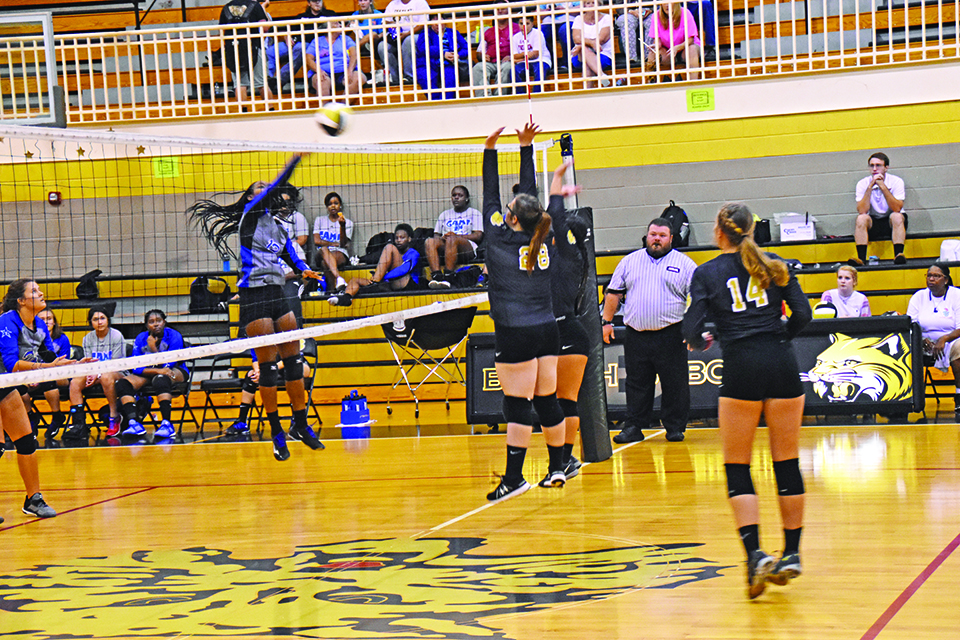 IN-HOME SECURITY: Beulah’s Danielle Williams and Jasmine Bonilla go up for a block against LaGrange. Photo by Rashad Milligan

BEULAH — Beulah hosted LaGrange in a grudge match on Wednesday evening after the varsity Bobcats defeated the Grangers on the road last week.

For the second consecutive week, Beulah’s junior high team fell to the older, B-team coming from LaGrange. Head junior high volleyball coach Sabrina Milligan gave the team’s performance a B+ on an afternoon where LaGrange just didn’t make as many mistakes as the team made last week in a more competitive match.

“I’m not going to take anything from LaGrange, they served very well today,” Milligan said. “It was a little gunshot when that ball comes flying at you as fast as it does sometimes. Especially my seventh and eighth-graders.”

Beulah’s varsity battled with LaGrange for the second straight week. The two evenly matched teams traded points as Beulah head football coach Cody Flournoy sat down in the gym to watch his daughter, Ansley, and the rest of the Bobcats.

LaGrange used its size advantage and quickness at the net to get the best out of set two to tie the match at 1-1.

Both schools went toe-to-toe in the third set, with no team having a lead greater than one point once both teams reached 20 points. The Bobcat student section stood up near the end of the set, with a handful of football players leading the surge on the court.

Beulah’s varsity players clarified to the student section that the match was going to five sets and to make as much noise as possible whenever the Grangers’ served. One student told another to “be as loud” as they were in class to motivate them to cheer louder.

LaGrange’s junior varsity squad matched Beulah’s student section energy and it translated onto the court as the Bobcats communicated and maneuvered around the court faster than previous sets.

LaGrange took a 17-12 lead, which resulted in a timeout as the Bobcats appeared to become frustrated on the floor.

“We let one mistake turn into two and two turned into three,” Beulah head varsity volleyball coach Allison Aikens said. “We just took ourselves mentally out of the ballgame it kind of snowballed on us and we let the game get too far ahead.”

After the timeout, Beulah looked to have run out of gas and LaGrange’s junior varsity team won the words of cheering sections, chanting “we can’t hear you” toward the Beulah faithful as the Grangers took the final set, 25-12.

“For the most part, we did really well,” Aikens said. “We didn’t attack the ball tonight like we’ve been doing. We had several pushes, attempts, the girls did well on digs, LaGrange just out-attacked us. They had a lot more kills than we did tonight and that was a big difference in the ball game.”

The Bobcats return to action at home tonight against Wadley, a match that was rescheduled from the school’s homecoming week.