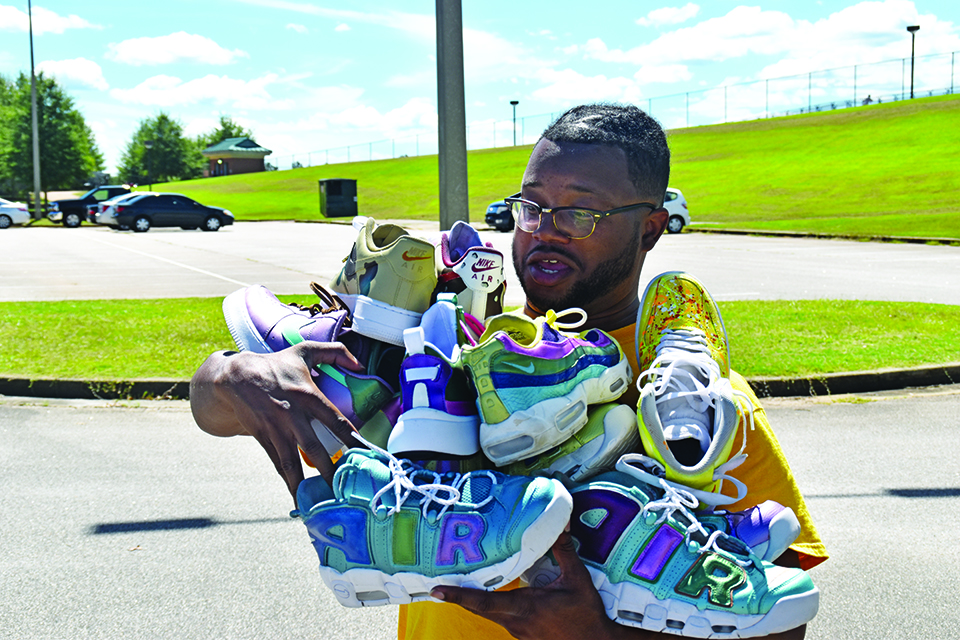 Lanett High School graduate Brian Patrick now wants the Greater Valley Area to look good. It all started when he saw a lack of originality in the shoe and fashion industry.

Growing up as a self-proclaimed “sneakerhead,” someone whose hobby is in collecting shoes, Patrick said that he would always look up the rare sneakers online but in a lot of cases, the shoes would never be released to the public. He saw one pair that he really liked on an online video and learned that the pair was customized.

Drawing was something that Patrick was interested in when he was a student at Lanett before taking a break to work on making music for a few years. The combination of seeing his girlfriend create art and wanting to create his own shoes inspired him to get back into art. His ultimate goal is to one day make a comfortable living off of his passion.

“I feel like if you can do something that you love to do and that can bring in income, you’ve already won,” he said.

His designs have included the popular Supreme and Louis Vuitton logos per request of customers. On Saturday afternoon, Patrick was sporting a yellow pair of shoes that had a Simpsons theme to them. He was most recently inspired to customize a pair to honor Colin Kaepernick in support of the stances that the former NFL quarterback has taken.

Patrick is currently planning to hold a community-wide shoe drive in the Greater Valley Area.

“I’m trying to find a way to give back to the less fortunate,” Patrick said. “If there’s anyone that has shoes that they don’t wear anymore, don’t have a problem with parting with, we’ll be glad to take them.”

To contact Patrick to make any order requests or donations for next year’s shoe drive, he can be emailed at brianpat4@gmail.com, messaged on his Brian Patrick Facebook page or texted at 7065900414. Patrick’s work can also be seen on his Instagram @fliboi_mead.