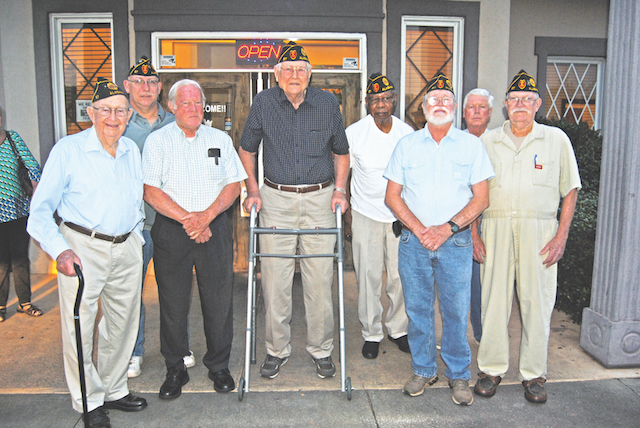 From left are American Legion members Bernard Paschal, Ron Douglass, Bill Williams, Ray Anderson, Mack Lett, Sammy Newton, Gene Clark and Billy Tolbert. All gathered at Post 67 on 9/11 to pay tribute to the military heroes who have served and continue to serve the county. - Wayne Clark

VALLEY — American Legion Post No. 67 meets on the second Tuesday of every month. The September meeting happened to fall on September 11, and Post Commander Lanny Bledsoe spoke to the somber day that took place seventeen years ago.

“Many of us will never forget what happened that day,” he said. “Many people lost their lives. Our whole country was changed forever. If you don’t believe that, simply go to an airport. Our armed forces have been in conflicts ever since. I don’t believe we will ever get back to the way things were before Sept. 11, 2001. Those who were 13 or 14 back  then are in their mid-thirties today. I don’t know if they fully appreciate the seriousness of what happened that day. We need to remedy that. People need to fully appreciate the sacrifices the men and women of the military have made since then.”

Bledsoe said that there will be a chance to show some appreciation for the sacrifices made in past wars at this year’s Veterans Day program at Veterans Memorial Park in Valley. In November, Post 67 will be hosting two events. The first will take place on Sunday, November 11 – which will mark the 100th anniversary of the end of World War I – and the second will take place at 11 a.m. the following day.

At 2 p.m. EDT on Sunday, there will be a program in the park to honor the 92 men from the local area whose names are on the park’s monuments. They died in service to our country in WWI, WWII, Korea, Vietnam and in the Iraq/Afghanistan War.

“Young people need to know what kinds of sacrifices were made by young men from this area,” Bledsoe said. “Boys who grew up here in the Valley died all over the world in the defense of our country.”

Bledsoe said that he’d like to have the U.S. flag at Veterans Park lowered to half-mast during the program and to raise it back to full staff at the conclusion of the program.

The regular Veterans Day program will take place at 11 a.m. the next day. “We need to get the word out that we will be doing this this year,” Bledsoe said.  “We’d like to have good turnouts. We want to have as many veterans there as we can.”

Post Adjutant Bobby Elliott told members of the Post that long-time member Glen Yancey had recently passed away and that a memorial service will be taking place in his memory in Lanett Oct. 14. It would be good, he said, to have members of the Post in attendance. He also asked Legion members to go by and see fellow member Ocie Cannon, who is not in good health.

“He would appreciate having anyone visit him,” Elliott said.