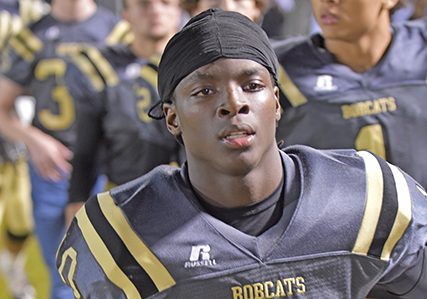 BEULAH — Cinderella will still be dancing on Friday nights in Lee County in a couple of weeks.

The Beulah Bobcats, who finished with a 3-7 record last season, improved to 7-2 last night after a 29-24 victory over Pike Road. The win ensured Beulah the opportunity to host a playoff game in a couple of weeks.

“It’s fun,” Beulah head football coach Cody Flournoy said. “I’ve been a part of good programs where they expect us to win and over here at Beulah, the community’s always been behind us, but the expectations were low. Now that we’re winning, everybody’s behind us, everybody’s showing up. I had parents bringing us gifts today, everybody’s trying to find a way where they can help, and it’s an electric atmosphere. It’s fun to be around, and everybody’s having a good time with it.”

Pike Road came out running the ball aggressively and entered the red zone on its first drive of the game. Beulah’s defense ended up stopping the Patriots on fourth down to take over on offense.

On the ensuing drive, the Bobcats struck first with a touchdown run from senior quarterback Lonzie Portis with 3:26 to go in the first quarter. Beulah missed the extra point after the score.

On the next possession, a Pike Road back broke free from a long touchdown run and the Patriots took the lead after making the extra point.

Beulah came back to the red zone on the next drive, but ended up with no points after a bad snap took the team out of field goal range. Pike capitalized on Beulah’s miscue, and ran for another long touchdown with 11 seconds to go in the first quarter.

Junior running back Chris Person then ran for a 34-yard touchdown and Beulah converted the two-point attempt to tie the game 14 to open the second quarter.

The Patriots would go on to score one more touchdown, and make a field goal before the end of the first half to increase the lead to 24-14.

“They big-played us,” Flournoy said of Pike Road. “We had to make some adjustments, we were working in the second quarter, slowed them down a little bit, but we got in the half and were able to make the adjustments that we needed.”

The Patriots didn’t score for the remainder of the game.

A few third and fourth down stops by senior linebacker Justin Hancock and a late-game interception by junior Dylan Coleman were keys to stopping Pike Road’s rushing attack from seeing the end zone in the second half.

“They run a quarterback-run system, and he’s tough,” Flournoy said. “He’s a good player. They got us in some formations where they just had us. It’s frustrating because I knew player-to-player we could compete with this team. I knew it was going to be a tough game. Every game we play is a four-quarter game because that’s the type of team we are. We run the football, and it shows up in the fourth.”

Person continued to have his way in the backfield for Beulah with a couple of strong runs to help the Bobcats run out the clock toward the end of the game. He finished the night with 233 yards and two touchdowns on the ground. Senior Caden Dowdell finished with 88 yards on nine carries.

Beulah finishes the regular season next week at McKenzie.

LANETT — Springwood finished its season with a 30-12 win Thursday night, but the Wildcats had to hang on after... read more