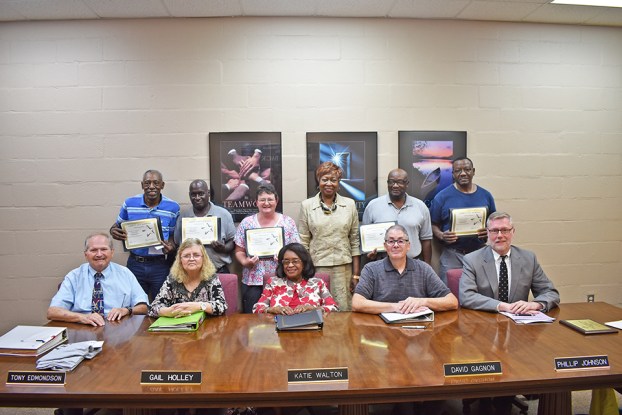 LANETT — Representatives from the three Lanett schools presented their Alabama Continuous Improvement Plan, or ACIP, for the 2018-2019 school year to the board of education at their Monday night meeting.

As described by several faculty members and Superintendent Phillip Johnson, the ACIPs lay out reasonable goals that can be tracked throughout the year with benchmarks and assessments. With each ACIP outlining the strategies and action steps that will be used to reach these goals, the entire board and school staff get a better idea of what the educational institutions are doing as a whole.

First grade teacher Melissa Smith from W.O. Lance began with the elementary school’s plan. Using Scantron Performance Series Assessments that are completed at other institutions around the state, Smith outlined how the school expects students in K-6 and K-3 to show improvements in reading and math.

With W.O. Lance’s growing population of students who use English as a second language, Smith said that an emphasis would be put on tracking their academic growth.

“Our population of EL kids has just blossomed,” she said. “Last year we had 55 kids tested at Lance … and of the kids we did have data on, 78 percent of them showed gains from this year to last.”

Principal Donna Bell from Lanett Junior High School then followed with an ACIP that placed an emphasis on providing a positive school climate for students and working to get parents involved.

Through monthly “positive behavior rewards” like flag football in September and Trunk-or-Treat this month, Bell said that the school reinforces good behavior by allowing students without disciplinary referrals to participate.

To help attendance, the school added extracurricular activities on Mondays which Johnson said national statistics showed was the day of the week most commonly missed.

For Lanett High’s ACIP presentation, Principal Jennifer Boyd spoke before the board. With an emphasis on the ACT, which is taken by every junior, Boyd said the school expects a 5 percent proficiency increase in reading and math.

“When you get into higher level math, kids want to know how they will use that,” she explained. “We are trying to relate it to whatever career field they want to go into. Our goal at the end of the day is to produce kids that are college and career ready.”

“Our buildings are known to be clean, updated and modern and these are the folks who do that for us,” Johnson said.