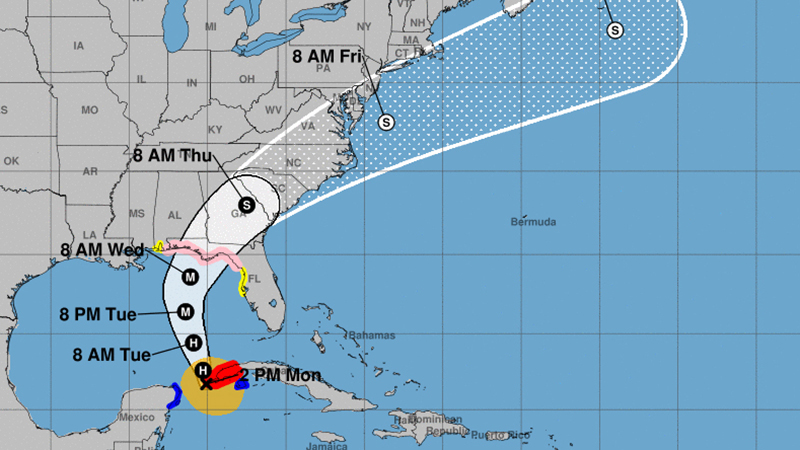 The projected path for Hurricane Michael has it turning toward Georgia on Wednesday. --Contributed

Hurricane Michael is expected to strengthen to a category 3 storm before making landfall Wednesday in the Florida panhandle.

The storm is projected to move into eastern Alabama and Georgia late Wednesday into early Thursday, but right now the projected impact on Chambers County, Alabama and Troup County, Georgia appears to be minimal.

The storm was upgraded to a category 1 hurricane Monday morning and is expected to bring damaging wind gusts, heavy rain and brief, isolated tornadoes to areas in its path. According to the latest projections — which show the storm moving further east than originally forecasted — eastern Alabama is on the “good” side of the storm.

“The impacts you’d get will be rainfall and maybe some gusty winds,” said meteorologist Jim Westland with the Birmingham National Weather Service.

Unlike Hurricane Florence, which dumped rain over the Carolinas for days, Michael is a fast-moving storm that will likely be out of Georgia by Friday. The current track has it making landfall by Wednesday morning and arriving in Georgia by Thursday morning.

“The forecast the hurricane center issued this morning had it to forecast to reach category three strength across the Gulf of Mexico,” Westland said. “It won’t carry that strength at all inland, but as it picks up steam, there could be impacts further inland than previously thought.”

The storm has prompted hurricane warnings along the Florida panhandle.