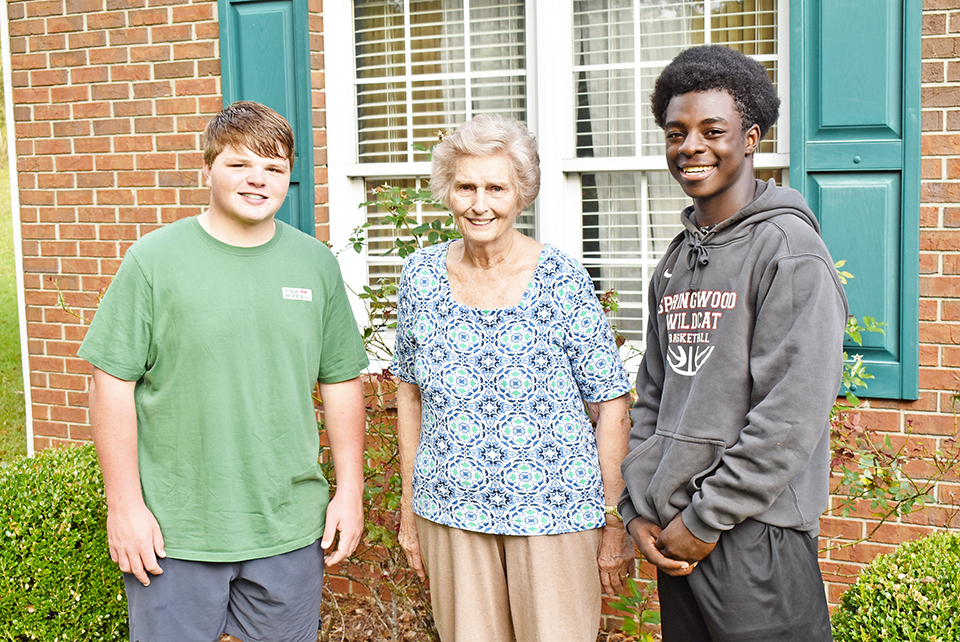 LANETT — Springwood School sophomores Trevin Williams and O.J. Tolbert were leaving campus after football practice Tuesday when they noticed an elderly woman waving on the ground for help.

Tolbert, 15, alerted Williams, 16, about the woman, 84-year-old Pat Oliver, on the ground and Williams decided to pull over in the woman’s driveway.

“I heard this voice that said, ‘ma’am, are you planting flowers or did you fall?” Oliver said. “And I said, ‘I fell.’ Then they said, ‘well, we come to help you. We decided that maybe that’s what you wanted.’”

Oliver was checking the damage that Hurricane Michael had done to her branches in the backyard before she fell shortly after 3 p.m. She began motioning to the students and parents who were leaving at Springwood for help.

The 84-year-old remained on the ground for over an hour and a half before Tolbert and Williams assisted her back on her feet. The two football players walked her back to the chair that was in her garage and gave her a glass of water.

“What we did [Tuesday], that was just something we’d do every day,” Williams said. “That’s how I was brought up, that’s how I was raised of what to do. I’d do that without thinking about that in a heartbeat.”

On the field, Tolbert is one of the top rushers in the Greater Valley Area. Last Friday night against Coosa Valley Academy, he led the team with 108 yards. Last season as a freshman, he rushed for nearly 900 yards despite missing three games.

“Yeah, I get a lot of attention from Friday nights but as I said earlier, it’s nothing new,” Tolbert said. “I’ve been raised like this. I don’t really pay attention to the hype or publicity, I just do what I do on a daily basis and be the helpful guy that I can be. I really don’t worry about being all popular.”

Oliver said that she usually doesn’t leave her house without her house phone and cell phone. She’s a lifelong Lanett native who graduated from Lanett High School in 1952. Her daughter currently lives in Cartersville, Georgia and her son lives in Suwanee, Georgia. Her son thanked the Springwood students on Wednesday afternoon over the phone when they reconnected with Oliver.

Before the teenagers left her front porch on Wednesday afternoon, Oliver embraced them with another hug of gratitude

“These are really good guys,” she said.