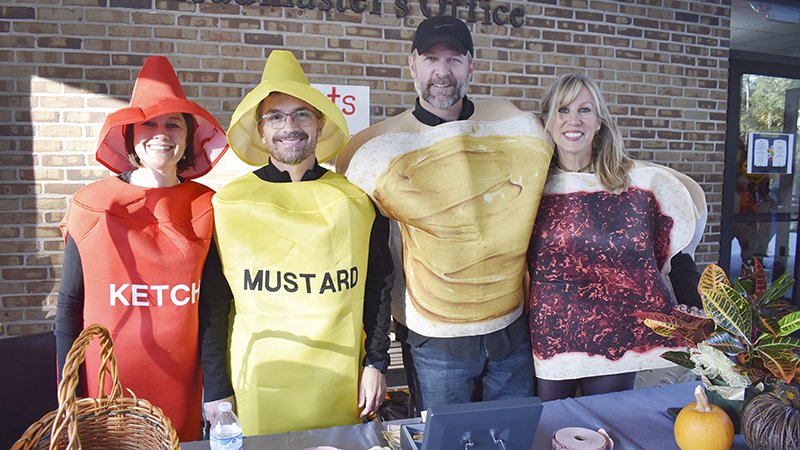 Above, who doesn’t like ketchup, mustard, peanut butter and jelly? Wearing those costumes at Saturday’s fall festival at Springwood School were, from left, Jenna and Carter Brown and Dr. Pat and Traci Martin. --Wayne Clark

LANETT — Springwood School hosted its annual fall festival Saturday afternoon. The weather was gorgeous for an outdoor event, and many local families took advantage of an opportunity to bring their children to a Halloween-themed event in a safe location. Lots of costumed kids enjoyed taking throws at a dunking booth, knocking down an Angry Birds wall with a catapult, jumping around in a bouncy house and testing their skill in getting across an inflated obstacle course. Most of the games were inside the Fine Arts Center. They included a bake/cake walk, go fish, tossing a bean bag into jack o’lantern buckets and other such fun events.

It’s a tradition at Springwood for the junior class and their parents to have a fall festival at the school on the final Friday in October. It’s a fundraiser for the junior-senior prom, which takes place in April in most years.

“The students and their parents have several meetings to organize what they are going to do,” Headmaster Rick Johnson said. “They really did an outstanding job this year. There was a great turnout.”

Springwood juniors Andie Martin and Sophia Shrewsbury said that well-thought-out planning is the key to having a successful festival.

“We had separate committees for advertising, the kinds of games we were going to have. ticket sales and other details,” Martin said.

Shrewsbury said that the school’s 2019 prom would be taking place on Saturday, April 6 at an undetermined place off campus.

“This was one of the best fall festivals we’ve had,” said Johnson. “It was well attended and everyone had a good time. The dunking booth and the hayrides around the campus were particularly popular.”

Eighth grade student Skyler Piper didn’t have the best of days on Saturday.

He’s the guy who sat in the dunking booth and stayed wet for most of the afternoon,

Thankfully, there was an electric heater nearby to help keep him warm.