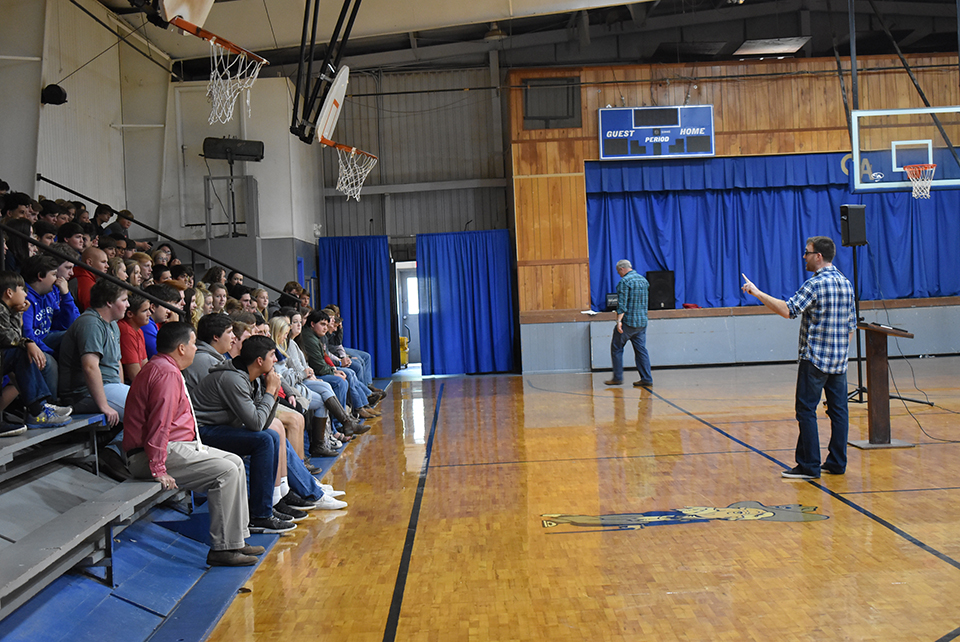 LaFAYETTE — Scott Maloney was a 21-year-old college senior who had his life turned completely upside down due to a traumatic brain injury caused by an alcohol-related accident. To share his story and caution against the over-consumption of alcohol, Maloney spoke to middle and high school students at Chambers Academy Wednesday Afternoon.

His impassioned speech full of words of warning and attention-grabbing rap breaks detailed how the accident changed his life.

Maloney explained how one night after heavy drinking with friends he found himself locked out of his dorm room. Instead of calling campus police to help let him in, his impaired judgment led him to climb a three-story tree in an attempt to crawl through the window. Maloney fell and the injury to his brain left him in a coma, which doctors told his family he may never come out of.

“How messed up is that?” he asked the students. “My parents were told to say goodbye to their child. No parent should ever be told that.”

The accident happened in September 2004.

To fully describe how traumatic the entire exerience was for him, Maloney detailed what it was like to see his own brain tissue. Adding to that, he talked about the frustration of having someone tell him what syllables were or how to tie his shoes.

“Of course I knew how to do those things, my body just wouldn’t do them,” he said.

After two years of learning how to walk, talk and feed himself again, Maloney started speaking to youth about how to stay safe and avoid the mistakes like the one he did. So far, he said, he has spoken in 25 states and does so to reach as many students as he can.

“I’m telling you all of this, so that this weekend, next weekend or on some random Saturday night in your future, these tips can help you save a life,” he said. “Maybe even your own.”

The presentation came during the middle of Red Ribbon Week, a nationwide observance that highlights the dangers of underage drinking and drug use.

Chambers Academy celebrated the week by having themed days that had students dress up in certain colors or their favorite team attire to inspire critical thinking on the topic, according to Headmaster David Owen.

Maloney’s next stop is at Auburn High School on Thursday.

He said that he hopes to eventually share his message with students in all 50 states. His work can be found on scottmaloney.com or on social media by searching his name.